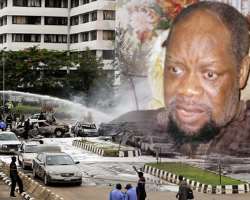 The increasing scourge of the dreaded Boko Haram insurgency and the growing helplessness of the Nigerian Polity in containing the situation, the quiet connivance of some northern elders and the ease with which this sect is recruiting even the educated into their fold is terribly signs of bad days to come.

Boko Haram demands are not different in principle from what the late Sir Ahmadu Bello wanted for the north before the British Colonialists granted Nigerian Independence. The North wanted separation from Nigeria, they want to practice their religion without interference, they want to preserve their culture and traditions. They want to control their destinies. They want to be governed by sharia laws , they want to grow at their own pace. The British Colonialists having other ulterior motives wanted one Nigeria. In order to convince the reluctant north to follow the one Nigeria agenda the colonialists skewed the political topography to favour the north as a pacifist agenda.

With increasing growth in exposure to western education, the feudal north lost power to the military north ( when IBB enthroned a sultan and Abacha dethroned and enthroned his choice). The death of MKO Abiola made it impossible for the military north to continue to hold on to power for long. They then had to repackage Obasanjo for a puppetist agenda. They saw the old Obasanjo, loyal, fearful and subservient but they never knew that years in prison have transformed the man to another person. Obasanjo, seeing himself as the ‘Father of Africa’ in the order of Mandela refused to be used at certain point in his regime . That was the point when the North lost temporary grip of power since the time of Ahmadu Bello.

Odumegwu Ojukwu , the Biafran secessionist leader during the crisis leading to the civil war and as a good student of history propagated the idea of loose confederation or at most seccession which was initially agreed upon by Gowon and his group during the Aburi meeting in Ghana. The colonialists came again and convinced Gowon that the seccessionst agenda was not in the interest of the North. The same theory they sold to Ahmadu Bello ten years before. They sowed the seed of the civil war and with help British, Soviet and American military powers they crushed the Biafran secessionist agenda.

Ojukwu and Gowon if left alone would have agreed for the nation to go their separate ways but foreign military advisers altered the equation of what would have been a far less fractitious separation. The earlier attempt to unify the nation under Aguiyi Ironsi was resisted by the north through a coup in which the then Head of State , Ironsi was brutally murdered.

The North lost power during the regime of Olusegun Obasanjo and the old ideology of “ Leave us alone and go your way” has resurfaced again through the activities of Boko Haram.

I believe in concensus. I believe in people sitting down to iron differences and determine whether a union or partnership should exist and on what terms. The proponents of Sovereign National Conference have been arrested, hounded, imprisoned over the years. They have been labeled fifth columnists, traitors and all sorts and now posterity have proved that the military and civilian dictators that hounded them are the real enemies of democracy.

Odumegwu Ojukwu, may his soul rest in peace had the foresight that many people didn’t have. He knew that the then North wanted a secession and he too wanted one so that everyone will develop at their own pace. To crush his arguments , three million Nigerians of Eastern extraction were killed . Their wives and virgins lucky to have escaped extinction were distributed to triumphant soldiers as spoils of war and the rest is now history.

The region that emerged victorious in that war ,after forty years is now sending message with all these bombings and killings that they want a separation and that there was no justification for the war afterall. It took Ken Saro-Wiwa twenty five years to discover that Ojukwu may not be wrong afterall. During the Ethnic Nationalities Conference in Enugu during Abacha regime, Ojukwu welcomed him with ‘’Good Morning’’ for opening waking up too late. Of course what Abacha did to Saro-Wiwa months later proved Ojukwu right. During the funeral of late Awolowo, Ojukwu described him as “The best President Nigeria Never Had” . He was indirectly reminding Awolowo that ‘though I lost Biafra, you too never had Nigeria, therefore we are all back to square one’

Boko Haram insurgency is a justification of the ideals, the foresyth and the superior arguments of the late Biafran Leader Odumegwu Ojukwu. Let somebody please posthumously apologize to Ojukwu for shortsightedness and imbecility of reasoning and ask the Almighty for another superior argument that will take the nation out of the wilderness.

Let government not rely solely on military approach to stop the Boko Haram insurgency. Let there be a proactive social interaction and argument with the core north and muslims whom the group claims to be fighting for to determine empirically whether their demands represents the wishes of the muslim north and if statistically proven then urgent steps should be taken to find a non-bloody solution to their demands.