Day Of Violence In Northern Nigeria Kills At Least 24 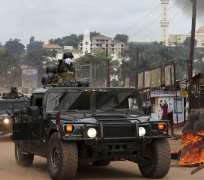 Clashes between a violent Islamist sect and security forces in Nigeria's northeastern city of Damaturu have killed at least 24 people in the past day, police said on Friday.

A sustained gun battle broke out between Nigerian security forces and suspected Islamist militants in Damaturu on Thursday, and several explosions were heard.

Then on Friday suspected sect members opened fire on a group of policemen shortly after Friday prayers in the city, killing four, local police officials said.

Police commissioner Suleiman Lawal of Yobe state, of which Damaturu is the capital, told Reuters a dusk to dawn curfew had been imposed on the city.

"The situation is now calm. We lost seven security men and twelve members of the Boko Haram sect were killed in the shoot out last night," he said.

"Though you cannot predict members of the sect, our men and the military are combat ready. Only one civilian was killed (in the violence on Thursday)".

Confrontations between security forces and the Boko Haram sect have become increasingly frequent in the past couple of weeks, as the north's simmering conflict escalates, though the insurgency remains low level and sporadic.

Lawan said the fighting in Damaturu broke out after his men raided a suspected Boko Haram hideout.

Damaturu was the scene of the most deadly Boko Haram assault to date, when 65 people were killed in a wave of shootings and bombings on Nov. 5 that left churches, police stations and mosques reduced to smouldering rubble.

At least 11 people were killed in a separate shootout in the northeastern city of Maiduguri, Boko Haram's heartland, on Thursday, an official at the morgue said.

Boko Haram, whose name roughly translates as "Western learning is forbidden" has been blamed for scores of shootings and bombings in the north, including a spate of attacks in the past few weeks across the region.

Despite many crackdowns, Nigerian security forces have so far been unable to contain Boko Haram violence. This year the group struck in the capital Abuja twice, including a suicide car bomb attack against the U.N. headquarters that killed 26 people. (Additional reporting by Afolabi Sotunde; Writing by Tim Cocks; Editing by Louise Ireland)