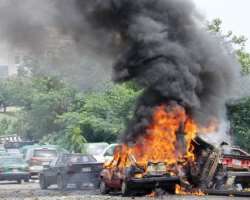 Multiple explosions and gunfire on Thursday rocked three cities in Nigeria's northeast, leaving at least one person dead in a region which has been badly hit by violence blamed on Islamists.

The unrest broke out in the cities of Maiduguri, Damaturu and Potiskum. Six blasts and gunfire hit Maiduguri, residents and a military source said, after explosions and shooting earlier broke out in Damaturu, with a church also burnt.

Gunshots were heard in Potiskum and fire could be seen in the area of a complex housing a police station, fire station and road safety office, residents said.

In Damaturu, a hospital source said a soldier was killed in the violence.

"The dead body of a soldier was brought to us this evening and seven policemen with gunshot wounds," the source said.

"A 10-year-old boy was also caught in the shootout. He is now in the theatre undergoing surgery to remove the bullets."

The police commissioner for Yobe state, where both Damaturu and Potiskum are located, said suspected members of the Islamist sect Boko Haram had carried out bombings and shootings in Damaturu.

"There have been bomb and shooting attacks by suspected Boko Haram elements," Lawan Tanko said.

"They engaged our men in a shootout and our men have succeeded in repelling their attacks and have pushed them toward Potiskum."

Tanko said he did not have details on casualties, but added that a church and a military patrol van were burnt.

Residents in Damaturu said explosions and gunfire had broken out in the afternoon.

"For the past 40 minutes, there have been explosions and shootings around the Pompomari area of the city," Damaturu resident Kabiru Musa said by telephone in the afternoon.

"Most people have moved indoors and it is not really clear whether it is an attack or a shootout with police and Boko Haram."

Another resident said it appeared suspected members of Boko Haram were in the streets shooting and setting off explosions at random.

Residents reported that people were fleeing in Maiduguri, but it was unclear whether there were casualties. A witness said one of the six explosions shattered the windows of a mosque in an office complex.

Maiduguri has borne the brunt of the violence attributed to Boko Haram, which has claimed responsibility for scores of attacks in the north as well as the August suicide bombing of UN headquarters in the capital Abuja that killed at least 24.

A military task force has deployed in Maiduguri in a bid to stop the sect, but it has in turn been accused of major abuses, including shooting civilians and burning their homes in the wake of bomb attacks.

Damaturu was hit by coordinated attacks in early November claimed by Boko Haram which left some 150 people dead.

Earlier this week, blasts at a house in Damaturu rented by suspected members of Boko Haram left one dead and several wounded.

Boko Haram launched an uprising in 2009 put down by a brutal military assault which left some 800 dead as well as its mosque and headquarters in Maiduguri in ruins.

It went dormant for about a year before re-emerging in 2010 with a series of assassinations. Bomb blasts have since become frequent and have grown in sophistication.

There has been intense speculation over whether Boko Haram has formed links with outside extremist groups, including Al-Qaeda's North African branch.

The group is believed to have a number of factions with varying aims.