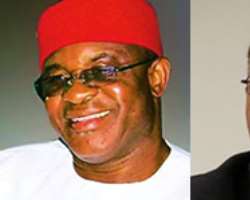 •Mark & • el-Rufai
Three weeks after Senators called for the prosecution of former President Olusegun Obasanjo over his alleged culpability in the sale of privatized companies, Senate suddenly kept mum on the request yesterday.

Before commencement of legislative business on Tuesday, Senate went straight into a closed-door session which lasted less than 30 minutes.

Daily Sun gathered that the Senate leadership was split on the consideration of the BPE report. Twice, the report was listed on the Senate Order Paper for consideration and twice, it was removed.

Last Thursday, the report was removed from the Order Paper and a fresh order published even after Senators were already in the chamber for the business of the day.

On November 30 this years, some Senators demanded Obasanjo's prosecution during a debate on the report of its ad-hoc committee.

The Senators had earlier insisted that the former President has questions to answer by allegedly circumventing the National Council Privatisation (NCP) Act and selling some prized national assets to cronies and political associates.

Obasanjo's administration set up the NCP which supervises the BPE and is charged with the overall responsibility of implementing the privatisation and commercialisation programme of the Federal Government.

It took the chamber less than 10 minutes in the Committee of the Whole to approve all the 45 recommendations of the Senator Ahmed Lawan-led committee after the report had been severally postponed.

All the recommendations were speedily assented to with just a sprinkling of some nays in the chamber.

Curiously, Senate approved the reversal of the sale of some national assets sold during Obasanjo's administration.

Senate also approved that the 'former Directors-General, Mallam Nasir el-Rufai, Dr. Julius Bala and Mrs. Irene Chigbue should be reprimanded by the NCP for seeking approval directly from the President instead of the council as stipulated in the Public Enterprises Act, 1999.

Speaking shortly after the chamber approved all the recommendations, the Senate President dismissed insinuations that the late consideration of the committee report was because of undue pressure on the Senate by extraneous factors.

Nobody forced us to undertake this probe. We did it on our own.

'I hope those who have been insinuating that the Senate has been trying to avoid discussing the report before; now know what we can do, and nobody made any effort to stampede us.

'There was no time the report was withdrawn because of conflict with senators; the Senate is one.'

In July 2011, the Senate set up the ad-hoc committee to investigate the process through which the BPE privatised the companies and established the agreements and conditions upon which the privatization exercises were consummated.

The Lawan-led committee was also mandated to determine how much was realized from the sale of the companies and where the proceeds were paid into while also determining how many jobs were lost and gained after the privatisation of companies; identify factors militating against the expected improved and good performance of the privatised companies as well as determine the best way forward with the privatisation exercise and the desirable development and growth of the sold companies.

The committee submitted its report to the Senate last month with some Senators including Deputy Minority Whip specifically demanding Obasanjo's prosecution.

Reacting to the report yesterday, Mallam el-Rufai wrote through his media aide, Mr. Muyiwa Adekeye, dismissing the recommendation pertaining to him.

He said: 'The strange recommendation that I be reprimanded for an offence I did not commit follows a tradition of shoddy investigation that does no credit to the Senate. Legislation and oversight are serious matters, and it is expected that people charged with such functions would truly apply themselves, avail themselves of cognate expertise and exercise due care so that the reports of such proceedings would be suffused with the kind of integrity that begets respect.

'The Senate's adoption of the said report and its recommendations today (yesterday) does nothing to change this position. Recommendation 38 which asks that I be reprimanded for seeking presidential approval for privatisation issues is without basis.

'A careful reading of the entire 172-page report yields Annexure 38, pertaining to the privatisation of NITEL/MTEL, and that does not support the recommendation. The decision to sell NITEL to IILL was approved by the National Council for Privatisation, (NCP), chaired statutorily by the Vice President. It was the same NCP that approved IILL's request for extension of time to pay for the purchase, and the failure to meet the new deadline led to IILL forfeiting its deposit to the treasury. Nowhere in the report is any document shown alluding to the request for or the granting of presidential approval in the NITEL/IILL matter. Once again, el-Rufai challenges the Senate to present any evidence to support this spurious recommendation.'

The former minister noted that while 'he is recommended only for a reprimand, other persons are mentioned for criminal investigation.

'There is no mitigation in this for him as he has not done anything to warrant a reprimand, even if he was still in the service of the BPE/NCP, which is no longer the case,', the statement added.