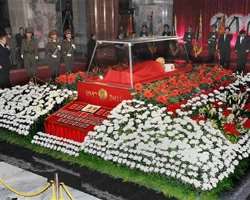 THE BODY OF NORTH KOREAN LEADER KIM JONG-IL LIES IN STATE AT THE KUMSUSAN MEMORIAL PALACE IN PYONGYANG IN THIS PHOTO TAKEN BY KYODO DECEMBER 20, 2011. MANDATORY CREDIT
Listen to article

China, which may have received advanced notice of the death of North Korean leader Kim Jong-il, has moved swiftly to call on the United States and other countries to help maintain stability in the reclusive state, officials and news reports said.

North Korea is in mourning since it announced Kim's demise on Monday, two days after the 69-year-old iron ruler died of a heart attack, plunging the region into uncertainty over its stability and who had control over its nuclear weapons program.

The official KCNA news agency said at least five million people -- one-fifth of the population of the impoverished state -- had paid condolences at statues and portraits of the leader and his father, North Korea's founder Kim Il-Sung.

"These places turned into a veritable sea of mourners who bitterly wept, looking up to portraits of smiling Kim Jong-il," it said.

His son Kim Jong-un, thought to be in his 20s, has been anointed the successor but it is likely power rests with a coterie of senior officials, including his aunt and uncle.

The younger Kim, along with top army and government officials, paid respects on Tuesday to his father, whose body was placed in a glass topped bier surrounded by the red "Kimjongilia" flowers named after him, television footage showed.

A leading South Korean newspaper reported on Wednesday that China, isolated North Korea's only major ally, learned of Kim's death soon after it occurred on Saturday.

JoongAng Ilbo quoted an unidentified source in Beijing as saying the Chinese ambassador to North Korea had obtained intelligence of Kim's death and reported it to the capital on December 17, the day Kim died of an apparent heart attack while on a train.

"North Korea informed China of Kim's death through diplomatic channels on the following day," the source was quoted as saying.

Top South Korean intelligence and military officials have come under criticism for failing to learn of Kim's death before the official announcement by Pyongyang.

South Korean President Lee Myung-bak left on a state visit for Japan some hours after Kim's death, indicating that neither Seoul nor Tokyo -- nor Washington -- had any inkling of his death.

China has given no official comment or even hints suggesting it was told of Kim's death before the public announcement. But in the past, Beijing has had advance notice from North Korea of major events, diplomats say. In 2006, North Korea told China 20 minutes or more beforehand that it would test its first nuclear device, they said.

"Preserving the peace and stability of the Korean peninsula is in the common interests of all sides," Chinese Foreign Minister Yang Jiechi told Japan's Foreign Minister Koichiro Gemba late on Tuesday, according to a report from China's Xinhua news agency.

"China is willing to work with Japan to continue making efforts to together protect the peace and stability of the peninsula and the region," said Yang.

It underscores China's desire to avoid ructions over North Korea after the death of Kim, whose successor-son is untested and largely unknown.

With its own leadership transition approaching, Beijing would be loath to allow any form of instability on its borders and the prospect of hundreds of thousands of refugees flooding across the Yalu River.

"China's foremost priority will therefore be to ensure that North Korea's new leader, whoever that may be, will be able to rally and unify the country together," said Sarah McDowall, an analyst at IHS Jane's.

In the Chinese city of Dandong, on the bank of the Yalu River border between the two nations, mourners who appeared to be North Koreans filed through a makeshift mourning centre.

Women in their 20s and 30s wept, wailed and prostrated themselves in front of wreaths of white and yellow chrysanthemums. Some men clasped their hands in front of them and bowed deeply.

In Washington, officials said the United States has signaled to North Korea's new leaders it hopes for progress on resuming talks on curbing Pyongyang's nuclear ambitions and has pushed ahead with discussions on resuming food aid despite the death of Kim.

"Given the mourning period, frankly we don't think we'll be able to have much more clarity and resolve these issues before the new year. But obviously we stand ready to keep working on this," said State Department spokeswoman Victoria Nuland.

Nuland said the contact occurred on Monday through what is known as "the New York channel" -- North Korea's mission to the United Nations -- but she was unable to say whether it involved any political discussion of the ramifications of Kim's death.