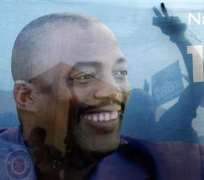 Joseph Kabila was sworn in on Tuesday for a new term as president of Democratic Republic of Congo, promising to improve the business climate and rebuild infrastructure destroyed during decades of conflict.

Kabila, in power in the central African state since his father's assassination in 2001, was reelected in a November 28 poll meant to shore up stability, but which was marred by deadly violence and allegations of fraud.

"We are going to pursue an improvement of the business climate to better serve investors. We are also going to pursue and accelerate the reconstruction of the country," Kabila said after he was sworn in by the Supreme Court.

He said reconstruction would focus on communication infrastructure in the vast country, which is over half the size of the European Union, but would also include projects such as building hospitals and schools.

Congo is the sixth worst place to do business out of 183 countries ranked by the World Bank, despite its vast minerals resources, and the average person lives on just over 50 cents a day.

Zimbabwe President Robert Mugabe attended the inauguration held by the banks of the Congo River, along with ministers of other African countries and ambassadors from the United States, France and Britain.

Speaking after his swearing-in, Kabila said that the electoral process represented the first time in Congo's history that a presidential mandate had ended without a crisis, and praised Congolese for their discipline.

"You were asked to choose on the one hand between an illusory promise based on incendiary language, and on the other hand the consolidation of peace and stability," Kabila said after being sworn in by the Supreme Court.

The November 28 poll marked the second presidential contest since a 1998-2003 war that killed more than 5 million people, and was seen as key to cementing gains in a country that lies on the bottom of the U.N. index for human development - a measure of average wealth, education and life expectancy.

But the vote was marred by lethal clashes between opposition supporters and security forces, allegations of rigging, and criticism from observer missions over poll irregularities.

Top opposition figure Etienne Tshisekedi rejected the results handing Kabila reelection, and declared himself president, raising fears of renewed street violence in the capital Kinshasa where he is popular.

Human rights group Amnesty International said late on Monday that Congolese security forces had been rounding up opposition supporters since the election, and called for the arrests to stop and detainees to be released.

Kabila came to power after his father, Laurent, was assassinated in 2001, and he later won election in 2006, in polls set by the United Nations.

Kabila has struggled to put an end to simmering rebellions in Congo's eastern provinces, despite U.N. backing, and investors say the country remains one of the most challenging in the world for businesses despite its vast minerals riches.