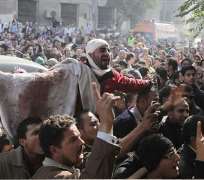 Egyptian police and soldiers firing guns and teargas fought to clear protesters from Cairo's Tahrir Square Tuesday, the fifth day of clashes that have killed 13 people and drawn a stinging rebuke from Secretary of State Hillary Clinton.

Clinton condemned as "particularly shocking" incidents such as one in which two Egyptian soldiers were filmed dragging a woman protester on the ground by her shirt, exposing her underwear, then clubbing and kicking her.

"Women are being beaten and humiliated in the same streets where they risked their lives for the revolution only a few short months ago," America's top diplomat said in a speech at Washington's Georgetown University Monday.

The United States, which saw Egypt as a staunch ally in the era of deposed leader Hosni Mubarak, gives Cairo $1.3 billion a year in military aid.

Clinton said women had been mostly shut out of decision-making by Egypt's ruling military and by big political parties.

"Women protesters have been rounded up and subjected to horrific abuse. Journalists have been sexually assaulted. And now, women are being attacked, stripped, and beaten in the streets," she added.

"This systematic degradation of Egyptian women dishonors the revolution, disgraces the state and its uniform and is not worthy of a great people."

Her remarks were among the strongest criticism of Egypt's new rulers by U.S. officials.

General Adel Emara, a member of Egypt's army council that took over after Mubarak was overthrown in February, said on Monday the attack on the woman protester was an isolated incident that was under investigation.

"HITLER'S INCINERATORS"
Gunfire rang out across Tahrir Square at dawn as security forces charged hundreds of protesters attempting to hold their ground, activists and a Reuters journalist at the scene said.

After a night of clashes, hundreds of protesters demanding an immediate end to army rule were in Tahrir in the morning.

Medical sources say 13 people have been killed and hundreds wounded in the violence that began Friday in Tahrir and nearby streets leading to parliament and the cabinet office.

Army generals and their advisers have condemned the pro-democracy protesters, sometimes in extraordinarily harsh terms.

"What is your feeling when you see Egypt and its history burn in front of you?" retired general Abdel Moneim Kato, an army adviser, told al-Shorouk daily, referring to a government archive building set alight during clashes. "Yet you worry about a vagrant who should be burnt in Hitler's incinerators."

"What is happening does not belong with the revolution and its pure youth, who never wanted to bring down this nation," he said. Despite the actions of the security forces in Tahrir, Emara denied that the army had given orders to clear the square.

U.N. Secretary-General Ban Ki-moon has criticized the use of "excessive" force by the Egyptian authorities. Rights groups said suppliers should not send small arms to Egypt.

The flare-up has also marred a staggered parliamentary election that began on November 28 and ends on January 11, but the army has said a promised transition to civilian rule will go ahead.

VIOLENCE IN TAHRIR
Before the latest charge by the security forces in Tahrir, protesters had been trying to tear down a brick wall the army had put up to block access to parliament, located nearby.

"Hundreds of state security forces and the army entered the square and began firing heavily. They chased protesters and burned anything in their way, including medical supplies and blankets," said a protester who gave his name only as Ismail.

"Some of those who fell had gunshot wounds to the legs," he added, speaking by telephone from Tahrir.

Politicians and members of parliament who had been staging a sit-in nearby tried to enter the square but were forced to turn back as the gunfire and clashes raged on, Ismail said.

Reporters Without Borders complained of the army's "systematic use of violence against media personnel."

Many Egyptians want to focus on building democratic institutions, not street activism, but have nevertheless been shocked by the tactics of security forces in and around Tahrir.

The latest violence broke out just after the second stage of a six-week election for Egypt's new parliament that starts a slow countdown to the army's return to barracks. The military has pledged to hand power to an elected president by July.

Hard-core activists have camped in Tahrir since a protest against army rule on November 18, which was sparked by the army-backed cabinet's proposals to permanently shield the military from civilian oversight in the new constitution. A week of mayhem killed 42 people.