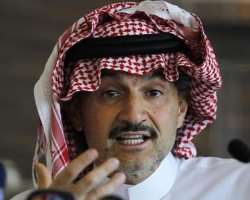 Prince Alwaleed bin Talal, the Saudi billionaire and an investor in some of the world's top companies, has bought a stake in microblogging site Twitter for $300 million, gaining another foothold in the global media industry.

Alwaleed, a nephew of Saudi Arabia's king who was estimated by Forbes magazine this year to have a fortune of over $19 billion, already owns a 7 percent stake in News Corp and plans to start a cable news channel.

Twitter was a key means of communication for protesters in the Arab Spring revolts this year, violence that threatened Saudi Arabia until the kingdom unveiled a populist $130 billion social spending package.

The investment was a secondary market transaction, meaning that Alwaleed and Kingdom Holding bought the Twitter shares from existing shareholders, rather than making a direct investment, according to a person familiar with the matter. The financing took place at around the same time as a $400 million venture-capital investment in Twitter that closed in September, but was part of a separately arranged transaction, another person familiar with the matter said.

Twitter chief executive Dick Costolo acknowledged the company was valued at $8 billion in the secondary markets in October, according to media reports, which would peg the size of Alwaleed's investment at just under 4 percent.

Kingdom's executive director Ahmed Halawani told Reuters that "substantial capital gain" was the motivation behind the investment, adding that there were no moves to ask for a board seat or influence strategy at Twitter.

Twitter, which allows people to send 140-character messages, or Tweets, to groups of followers, is one of the Internet's most popular social networking services, along with Facebook and Zynga Inc.

Bernhard Warner, co-founder of analysis and advisory firm Social Media Influence, said: "The Arab world, of course, knows full well the value of Twitter. In the past year, it has been a force in politics, in regime change, so there is not a single person in that region in a position of influence who is not following the increasing power of Twitter.

"(Alwaleed) must see Twitter as something that is going to be a really powerful broadcast channel," he said, adding the Saudi got into the internet boom belatedly, with mixed results, and appeared to be "kind of late" to the game again.

Investors in Saudi Arabia were more bullish, sending in Kingdom shares up 5.7 percent to 8.30 riyals at the close.

"One of the few sectors to record significant revenue gains in the last three years has been technology, which is why Kingdom would see Twitter as a good addition to its diversified portfolio," said Hesham Tuffaha, head of asset management at Bakheet Investment Group in Riyadh.

Alwaleed, 26th on the Forbes list of billionaires with a sizeable stake in Citigroup Inc, has spoken in favor of broader political participation, fair elections and effective job creation across the Arab world.

He has also been publicly supportive of management, including the Murdochs at News Corp and Citigroup chief executive Vikram Pandit.

But Abdel-Khaleq Abdullah, an Emirati political scientist, said the investment was unlikely to raise eyebrows in official circles.

"He just saw an opportunity, a money-making opportunity, nothing more, nothing less," he said. "(Internally), it's going to be viewed as a shrewd investment and I don't think we should read too much into it."

The prince's wife, Princess Ameerah al-Taweel, is a regular Tweeter and has nearly 83,000 followers on the site.

Markets are eagerly anticipating a Twitter float, but the company said in September it was in no hurry to go public.

The shares of online games developer Zynga ended at a 5 percent discount to their issue price on their trading debut on Friday and analysts said any valuation for Twitter could be misleading.

"You could put any number of zeroes behind a valuation of a private company. Before it goes public it is almost meaningless," said Warner.

Kingdom owns a near-30 percent stake in Saudi Research and Marketing Group, which runs a range of media titles.

"Our investment in Twitter reaffirms our ability in identifying suitable opportunities to invest in promising, high-growth businesses with a global impact," Alwaleed said.