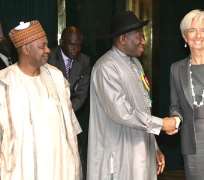 ABUJA, December 19, (THEWILL) - President Goodluck Ebele Jonathan said Monday in Abuja that his Administration remains totally committed to engineering a positive transformation of the Nigerian economy that will ensure that the country becomes a much bigger player in the global economy as envisioned in its Vision 20:2020.

Speaking at a meeting with the Managing Director of the International Monetary Fund (IMF), Ms. Christine Lagarde, President Jonathan said that the team established to oversee the implementation of the administration’s economic agenda will receive all the political support it requires to ensure that the objective of significantly improving the national economy is attained.

“We are totally committed to changing things in Nigeria. Our vision is that by the year 2020, Nigeria will have become a much bigger player in the global economy. We have established a good team and we will give them the full political backing they need to succeed,” the President said.

Noting that Nigerians had become wary and skeptical of dealings with the IMF in the aftermath of the Structural Adjustment Programme (SAP), President Jonathan said that he believed that the IMF was now a changed institution which could contribute positively to the economies of Nigeria and other developing nations.

“I believe the present IMF is different. Our emphasis is on poverty alleviation and job creation. We are also looking at ways of improving education and health-care delivery. I believe we can work together constructively,” he said.

Reviewing international developments with Ms. Lagarde, President Jonathan said that he believed that the IMF had a key role to play in resolving the ongoing crises in the global economy, noting that events in the developed economies were bound to affect developing countries.

Ms. Lagarde commended President Jonathan’s Agenda for National Transformation and the actions being taken by his Administration to ensure its effective implementation.

She informed the President that the feedback she had received from the IMF team which recently undertook a review of the Federal Government’s economic programme was “very positive”.

The IMF Managing Director said that the IMF team had been very impressed with the Government’s prioritization of job creation, agriculture, power supply, education and health-care.

Ms. Lagarde said that the team was also impressed with the Jonathan Administration’s fiscal and monetary policies as well as the reformation of the banking and financial services sector, and the establishment of a Sovereign Wealth Fund.

She advised, however, that the Government should take further steps to protect Nigeria from the adverse effects of the crises in the global economy.

Mark Advocates For Africa-Friendly
President of the Senate, Senator David Mark during a visit of Lagarde to his office at the National Assembly in Abuja urged the International Monetary Fund (IMF) to make their economic and financial policies friendly to Africa.

He declared that a policy, which does not work for a supposed beneficiary is unnecessary.

Senator Mark told the visiting Managing Director that any economic policy that brings pains rather than succour to the people is worthless.

He said; “The impression people have about IMF is that of an organisation that prescribes an economic solution that hardly works or practicable in any country.

“It is a challenge for the IMF to disabuse our minds by making its economic policies practicable. The policies could be laudable but it sometimes does not fit into local arrangements.

“You must take cognisance of local situations in your prescriptions, because a uniform policy may not work for all nations”, saying that condition of respective nations is imperative because a template may out work for all countries.

“Our markets are accessible to you but yours (Europe) are not accessible to us. This imbalance of trade is not good; you should make efforts to give us some levels of accessibility to your markets,” Mark requested.

He also asked the IMF to put necessary measures in place to ameliorate the shock on the nation’s economy resulting from the crisis in the European economy.

The President of the Senate was pleased to note that IMF was interested in the reforms and transformation programme of Nigeria and assured that the legislature would partner with the executive arm of government to make it work.

Earlier, Lagarde briefed the principal officers of the Senate on global economics trend and asked developing nations to put safe-guard measures in place to absorb the shocks from the economic crisis in Europe.

She said the recipe for resisting the shock has become imperative in order to avoid the ripple effects of the meltdown.

Lagarde noted that Nigeria may be on the receiving end of the economic shock from Europe because of the volume of her trade all over the world.

Lagarde who was France’s Minister of Finance before her appointment as IMF MD said she is impressed with the reforms and transformation agenda of the present administration and urged the legislature to cooperate with the executive arm of government to make it work.

She added that Nigeria is the first country she is visiting in Africa since her resumption as IMF boss.

Speaker of the House of Representatives, Hon. Aminu Waziri Tambuwal has called for the creation of additional constituencies for Africa at the International Monetary Fund (IMF), under the voice and representation reforms.

Tambuwal made the plea when Lagarde paid him a courtesy call in his office.

He said Nigeria was in full support of the on-going reforms being undertaken by the Board of Governors of the fund.

“We wish to formally request the IMF boss to consider Nigeria for one of the two chairs based on our cordial relationship with IMF.”

The Speaker appealed to the IMF boss to ensure that the financing instruments of the fund should be more responsive to the needs of African countries by increasing the concessions in the funds lends to low income countries.

“The managing director should ensure that funding of the poverty reduction and growth trust (PRGT) is enhanced through the transfer of a significant portion of the gold windfalls of 1.7 billion dollars to the concessional trust,’’ the Speaker stated.

Earlier in her remarks, the IMF Managing Director lauded the role played by Okonjo-Iweala during the negotiation for debt relief from the Paris Club in 2005, saying, “I pay tribute to her resilience and sense of public interest.

She explained that IMF also provides surveillance to member states on yearly basis and meets with representatives of countries across the world with the view to “see what is being done and how they performed, what the results are….”

This, according to her, will allow the Fund to know the “spill-over effect” of various policies being implemented in Nigeria, and what spillover effect it has on Niger, Benin, Mali and other places.

She explained that the delegation was in the country to engage in dialogue with the government of Nigeria to see how it can partner with her.

“IMF is very much more in partnership with the countries of which it is essentially the agent for better economic policies for stability around the world and for international monetary system that works better,” Lagarde stated.

Also speaking at the event, Dr. Ngozi Okonjo-Iweala, said that the Fund no longer directs countries on their economic policies but advises, adding that there was a need for the fund to consult with its 187 member countries to evaluate their performances.

“We are now partnering with an institution that is here to listen and help us. We set the policies, we set the pace, and they support us to do what it takes for the Nigerian economy. The idea of the IMF coming to tell people what to do, this is no longer what happens and so we are happy to partner with this institution,” Okonjo-Iweala added.