Actresses That Will Rule And Shake Nollywood By 2012 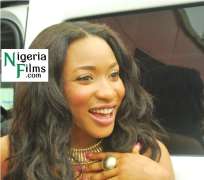 As nollywood continues to undergo revolution, a lot has become at stake and the stars are very much ready to up their game. The days are also fast approaching when actors and actresses who cannot deliver would be relegated to the backyard and pay dearly for it.

2012 therefore promises to be an exceptional year in nollywood for a lot of reasons. First, there are a lot of upcoming actresses and actors who desire to permanently stamp their place in nollywood. Secondly, those who have been in the industry for a long period of time wants to proof some critics wrong and show that the deserve all the applause and praise they are receiving from fans all over the globe.

Whatever the situation maybe, nollywood is not going to remain the same and we are surely going to witness a better, bigger, entertaining and an improved nollywood come next year. These are the list of actresses that would rule and dominate the headlines in nollywood by 2012. They would stir up fire in nollywood like never before. You can simply say ''Amazing Nse'' the beautiful actress would certainly headline the game in nollywood by 2012. She just won the best actress in the English category at the just concluded BON awards. An online website once described her as the ''Silent Tsunami'' and ''The Next Big Thing'' in nollywood.

Nse ikpe etim may not be far from this description as she has proven times without number that she can stand the heat and deliver in difficult movie roles.
Called by the name ''Omoze'' in the movie reloaded, the actress has continued to rise and there seems to be no limits. Nse was discovered few years ago by nollywood veteran emen isong and she has since remained part of the royal arts academy family. She has got everything by her side to be the best of the best, the talent, the right network, the working knowledge of the industry, the diversity and the personality.

Be ready to see her rock it next year in kunle afolayan's movie Phone Swap, monalisa chinda's Kiss and tell, and the latest and first movie production by rita domique. She is unarguably the best actress at the moment alongside tonto dike and mercy Johnson. Tonto dike's best is yet to come and her fans are waiting. It has been said in the industry that nobody loves nollywood more than uche jombo and tonto dike. Like a bomb tonto would explode come 2012. She has got the swag and the experience to make her compete with the best of the best in the industry.

Although often being criticized by the media based and on the roles she chose to act, but she is fast crossing her bridge to reach her best form. Watch out for tonto in 2012.