THE IMPOSTOR IN THE IMO STATE HOUSE OF ASSEMBLY PART 2 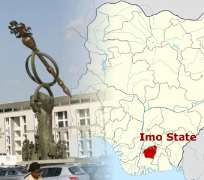 I choose to hit the nail on the head about Chief Luke Chukwu, the impostor in the Imo State House of Assembly,regardless of whose ox is gored.I am vocal when it comes to injustice of this nature, moreover, it is Ohaji /Egbema ,my constituency that we are talking about. I choose to speak my mind even before anybody's intimidation. Was it not Thomas Jefferson who said, "rebellion to tyrants is obedience to God?' We cannot wait for anyone to extend any invitation to us in Ohaji/Egbema to rise up and fight injustice done to us, but as individuals or groups, we must fight injustice in our different ways.

My question is still begging for answer. I want to know why Chief Luke Chukwu that did not win election into the Imo State House of Assembly is foisted on the people of Ohaji/Egbema as their representative in the State House of Assembly. Like Sample Ekwe would say ' e dey pain me gaga',i am hot with anger.We all know that it is a parliamentary tradition all over Nigeria that all elected parliamentarians must before inauguration, present to the Clerk of the House evidence of victory in the election which is the Independent National Electoral Commission, INEC Certificate of Return and evidence of assets declaration.

A Certificate of Return was not issued to Chukwu on May 24, 2011, when INEC issued Certificate of Return to candidates that won election into the Imo State House of Assembly.So what evidence of victory was used to inaugurate Chukwu as member representing Ohaji/Egbema in the Imo House of Assembly?Why is Chukwu parading himself as a member of the Imo House? He has no Certificate of Return according to law yet attends house proceedings which is criminal. Who insisted on inaugurating him against age long parliamentary tradition? Why should parliamentary laws be broken so as to smuggle him in via the back door?.Is the Imo State Assembly operating a different constitution from that of the Federal Republic of Nigeria?

I asked these questions in my article last week . I have waited for answers or rebuttal either from the affected “member” of Imo House, the House itself or their agents with no avail. This loud silence has prompted the part 2 of my last week article. Imposing Chukwu on Ohaji/Egbema is a lame and shameful game that must be stopped. We all know that in politics any things goes ,but shall we always join Satan 's crusade just for a loaf of bread ? Shall we go back to the military dark era ? Shall we because of the beauty of our girl friend,climb a pear tree that is protected with fetish objects ? God forbid.We must call a spade a spade.

Prior to June 06, 2007, the Ohaji/Egbema Local Government Area in Imo state was regarded as the region of never–do–wells in everything. The people were treated as backwards. However, in 2007, the history of Ohaji/Egbema changed for good. This was as a result of the emergence of Rt. Hon. Chief Goodluck Nanah Opiah as the Speaker of the Imo State House of Assembly, a position he held with trailing and immeasurable accomplishments attracting commendation all over.

Apart from his epoch – making reversal of the unfavorable history of executive – legislative relationships in Imo State, the Opiah – led Assembly carved a niche for itself through peoples – oriented and prosperity driven laws such as the law establishing the ISOPADEC i.e Law no. 13 of 2010 as amended. Ohaji/Egbema people see Opiah as that messiah, whose term in office laid a solid foundation for the future of Ohaji/Egbema people. His term translated the word “ democracy” into actions, giving homes to indigent families, putting roofs upon our school children, giving jobs to the youths and giving the people of the area voice in governance.

And so in April 26, 2011, Rt. Hon. Goodluck Nanah Opiah was overwhelming elected with over forty thousand (40,000) votes against Chief Luke Chukwu's five thousand (5,000) votes. The most amusing was the notorious fact that Chukwu lost to Opiah in his own polling unit in Umuapu ward. It is also a notorious fact that Rt.Hon. Opiah was formally declared as the winner of the election by the Local Government Returning Officer on April 26, 2011 with documentary evidence as shown in several prescribed form in line with the provision of the electoral Act as amended.

When he was a Council Chairman, he escaped impeachment via the help of HRH Eze Anthony Oguzie (Uncle 'T' of Ohaji/Egbema L.G.A). We did not vote for Chukwu because he sponsored strife and crises in his Community. This is why he is avoided in his immediate community. In another community within his immediate community called Ihie it was alleged that he sponsored two groups engaged in violence called Vulture and Eagle. It is on record that the members of the Vulture took refuge in his residence for several months.

The Ohaji Central Youth Association did not survived from the crises created by Chukwu when he was Local Government Chairman. Prominent people from Ohaji such as Prince Rollins Ohagwams, Remy Chukwuyere. Barr.Okoji Temple, Oloko Teddy, Dam Okpor, Obinna Akpelu, Kingsley Nwaonuma, Jakponna Vitalis and Ilua Azubike are not in talking terms with him.

We did not vote for Chukwu because he was into marital troubles. We believed that if he could not control a family, he cannot handle the constituency. When he was Council Chairman,he appointed a very beautiful girl as his PA. This lady hails from Apani in Ikwerre Local Government area of Rivers State. Chukwu got married to this PA lady , rejected his first wife, had a son from the PA lady, and dumped the lady with his son claiming the lady influenced him with black magic.

We did not vote for Chukwu because it was alleged that when he was Council Chairman,he procured fake certificates for a Mr Omai which he used to gain appointment as supervisory councilor for works in Ohaji/Egbema LGA. The certificates we were told were purchased from New Era vocational/Commercial College, Umuokanne in Ohaji. In spite of the opposition to the nomination of Mr. Omai as well as his “academic records”, Chukwu had his way, and a fraudster was appointed as supervisory councilor for works.

We did not vote for Chukwu because he has no honour, integrity and electoral worth! He was appointed House Committee Chairman on Agriculture, and he immediately dissolved Adapalm Landlord Association and appointed Mr. Omai as the Care-taker Chairman .He idled by, while the fortunes and future of his purported constitution got devastated through an illegal sale of Adapalm. This decision on Adapalm pitched him openly against Dr. Placy Ekwueme, Hon. Meffor Gideon, Hon. Goddy Esom Obodo, and Prince Emmanuel Assor who are part of the land- holding in Adapalm.

Luke Chukwu has done nothing in respect of the continued embargo on the account of the ISOPADEC by governor Owelle Rochas Okorocha. Chukwu lacks the wisdom and the political strength and moral right to cause a challenge. His presence in the House of Assembly is grossly defective, and so he cannot fight his political benefactors who are resolved to punish his constituency with denials, underdevelopment and pains. He has not condemned in any form, oral or written in any media, the incessant violations of the law establishing ISOPADEC (law no. 13 of 2010 as amended). Spurious nominations for appointments are made for the ISOPADEC Governing Board without due regard to the provisions of the law as earlier quoted.

The hope of the people is not lost as we believe that this impostor will be removed via legal means. Ohaji/Egbema people are earnestly waiting for the court judgment between Rt Hon Opiah and Chief Chukwu. The people believe that the Judiciary will restore their improved political standing through acknowledging the victory of Rt. Hon GoodluckN Opiah. Opiah via his council Dr Livy Uzoukwu SAN went to the Federal High Court Owerri for the interpretation of the constitution as amended and the electoral act as amended and that he be declared winner and issued a Certificate of Return in view of the result of the April 26 2011.The suit has been adjoined since October for judgment. The hope of the people of Ohaji /Egbema is now on the Judiciary. Save us o' God.