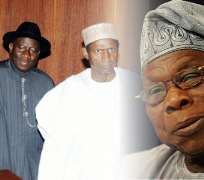 In the land of the blinds in Nigerian political circles, the one-eye man is the king. A few of us who have poured venoms on Obasanjo during his reign are now beginning to miss him. His reign was full of controversies, show of power plays as in OBJ/Atiku slug fights that gave us an insight into how PDP was funded and the fall of the mightiest never witnessed in the history of Nigeria. Some of these shows also happened during the time of others as in Buhari/Idiagbon reign but abuse of journalists, students and activists were rampant then. Many of them fled during Abacha years and some were detained; even at the Airport in this Yar’Adua rule of law reign.

However, during Obasanjo years we also witness Odi and Zaki Biam massacres in the name of law and order. The General of Odi, Victor Malu had to suck up the same punishment in his hometown as one of the victims of Zaki Biam. What goes round comes around and round. So make no mistake about it, this is not to glorify OBJ but to remind us how deep Nigeria has fallen into slumber as the giant of Africa after him. It has regained the role of business as usual. Of course, with all the help we need from the kitchen cabinet of Baba Go Slow. These sand-sand politicians, who hate sand their own gari anytime, have made their way back surreptitiously.

One of the known bad characteristics of Obasanjo that might have helped him during his reign was that his friends do not trust him and that worked immensely for the good interest of Nigeria. Indeed some of us were not surprised when Ribadu said he used Obasanjo to get to some of his closest friends who were crooks. In the debate of who actually used who, Ribadu made his point. Many believed that Obasanjo used him to clamp down on his enemies. If Babangida was one of those enemies who could not make it back as president, thank goodness! However powerful he may be now, it could have been worse as a president.

We seem to forget that it was Obasanjo who took on the military politicians and retired most of them from the Armed Forces with the backing of Danjuma, of course. He refused to let Danjuma go even when he needed Medical treatment for which speculation was rife. By the time Danjuma wanted his pound of flesh, which he had no problem getting at the expense of Nigeria even during Abacha years, it was Obasanjo who stood for Nigeria. Danjuma oil fields were seized as he tried to sell it to foreigners as if it was from his papa’s backyard.

We cannot talk about law and order and not give credit to Buhari. He was one of the least corrupt of all our politicians or militircians, yet some aristocrats were able to use him to bring large sum of money into Nigeria unchecked and that he shielded Dasuki for so long as we now know, blemished his no-nonsense approach. It was this same Obasanjo who dispossessed him of the fiefdom of special account usurping special projects all over Nigeria. Could anyone have imagined some aristocrats or old friends going to Idiagbon for favors?

No matter what we thought about Murtala Mohamed about his past exploits during the war, he changed and repented leading Nigeria into the right course. It may be hard to forget but if we must forgive Mohamed for his past ways because we may never get a saint from heaven to rescue us. Most of the saints that have lived in Nigeria have been corrupted or summarily dealt with. So in order to survive, some have played some dirty politics. Unfortunately, for giving us hope, the same evil players behind every coup cut Murtala down.

So what is it that made the reign of Obasanjo different? If we want to be sincere with ourselves, this same one-eye man made a difference by being unyielding to cronies more than any leader that has survived in our Country. His style might have been rough, he may have wished he was the only credible leader in Africa but we can blamed that on his very humble beginning to prove to his luckier classmates in Abeokuta that he was more blessed by God. His performance was a disappointment because with his background and his time in jail, he could have done much better. He had a second chance to reincarnate himself but blew it.

After Sir Tafawa Balewa reign, Nigeria had lost focus. Yar’Adua reign has made it easy to refocus on Obasanjo and come to the conclusion that Nigeria was better under OBJ than any other leader since 1966. Those who could have performed better than OBJ never lasted long enough or never made it to the seat of power. This is not a place to start counting his achievements because Nigeria could have fared better if he had solved the problem of electricity instead of GSM, bribing Paris Club for lofty ratings or piling up foreign reserve that could have been better spent at home but for the fear in lack of closer and rigid supervision on its employ. He sat over his own undoing by truncating his modest achievements with Third Term ambition.

He could beat his chest all he wants that he built more small power generating stations than any other government and arranged for gas to be delivered to them. As we all know, intention is not good enough if it is not coordinated and implemented. It is only in Nigeria that a government will spend so much money and time building gas turbines that cannot be powered by ready gas supply. The fact that gas supply missed road, showed that all the brains OBJ appointed equally across our Niger River and imported African experts could not move those oil corporations to stop flaring. He must accept that failure during his watch.

Out of these missed opportunities came a tiny recent miracle in Kwara State: it is the continuous supply of electricity from the same gas turbines built by Obasanjo. If the report is right, the State funds were used when Federal funds were suspended in order to audit past appropriation, which bridged the missing link between gas supply and gas turbine. We are still waiting to see how long this magic electricity supply will last. More important, we may have seen the same result replicated in other states where turbines are ready to fire if Kwara proficiency is applied.

We need to watch Kwara State very well because that was where agriculture had been jolted with established farms managed by Zimbabwe farmers during Obasanjo reign. We heard complaints of some hitch between demand and supply that made it difficult for farmers to produce more of what they are capable of. Since there are enough brains to meet the challenge of gas supply and gas turbine in Kwara, farmers may be able to gain. The only hope is that this can be replicated in the whole of Nigeria.

Obasanjo had an interview on British television where he displayed a cool temper and was able to rubbish the interviewer. If he had only displayed that with home journalists instead of chasing them around with koboko, he could have been a better leader. While accepting blame for corruption during his reign could have been in order, he feared the implication that he was corrupt of guilt by association. Since he was the President, the ultimate responsibility rested on his head. Nevertheless, he was right to challenge anyone to implicate him personally if they can. While we are still looking for OBJ riches outside of Nigeria, he goofed for receiving donations to his Bell aggrandizement while still in office.

By instituting two anti-corruption agencies like no other leader and bringing down those we thought he would never touch deserve some praises not the hoots and jeers that we give him when we know those who have tried before him were either eliminated or overthrown. Where are some of the jeerers and the hooters cooling their time these days praising the Yar’Adua rule of law? Some of them are in high places implementing our newly found civilized way of dealing with looters. Others are boasting of prosecuting those aiding and abetting our politicians abroad when they cannot lay a finger on those under their noses in Nigeria. Sure, any excuse to spend our foreign reserve will do. We need a new leader from any talent anywhere in Nigeria, why not the turn of South-south or South-east?