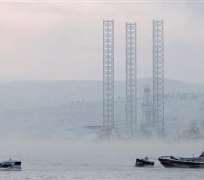 A drilling rig with 67 crew on board capsized and sank off Russia's far eastern island of Sakhalin on Sunday while being towed through a winter storm, leaving more than 50 dead or missing in the icy Sea of Okhotsk.

Emergency officials said the crew of an icebreaker and tugboat rescued 14 workers alive from the jack-up rig, the 'Kolskaya', which was operated by a Russian offshore exploration firm. They recovered four bodies from the water.

"The Kolskaya keeled to its side ... and sank within 20 minutes. The depth of the water at the site is 1,042 metres (3,400 feet)," Russia's federal water transport agency said on its website.

Four of the survivors, suffering from hypothermia, were airlifted by helicopter to land and taken to hospital after the disaster struck at 12:45 p.m. (0145 GMT).

The rest of the crew were missing, 200 km (125 miles) off the coast of remote Sakhalin island. The water temperature was one degree Celsius (33.8 Fahrenheit), giving survivors around 30 minutes before freezing to death, according to maritime and rescue websites.

Three rescue craft, as well as helicopters, were sent to scour the waters for survivors from the rig owned by Arktikmorneftegazrazvedka (AMNGR), a unit of state-owned Zarubezhneft.

"There is no ecological danger. The vessel was carrying the minimum amount of fuel as it was being tugged by two craft," said a spokesman for AMNGR.

The incident was a blow to efforts by Russia, the world's largest energy producer, to step up offshore oil and gas exploration to stave off a long-term decline in onshore production.

The jack-up rig, which has three support legs that can be extended to the ocean floor while its hull floats on the surface, was heading from Kamchatka to Sakhalin when it overturned in stormy conditions with a swell of up to 6 metres.

"(President) Dmitry Medvedev has ordered all necessary assistance be provided to the victims of the drilling platform accident and has ordered a probe into the circumstances of the loss of the platform," the Kremlin said. The Emergencies Ministry said it would work through Sunday night.

GAZPROM OFFSHORE DRILLING
Russia's federal Investigative Committee, which answers to the president, said it would investigate the accident and would question rescued workers as well as those responsible for organising the towing of the craft.

"The violation of safety rules during the towing of the drilling rig, as well as towing without consideration of the weather conditions ... are believed to be the cause of the (disaster)," investigators said on their website.

The 'Neftegaz-55' tugboat, also owned by AMNGR, had been towing the Kolskaya and took part in the search effort, but pulled out after suffering hull damage from the high waves.

The tug, carrying most of the crew rescued from the rig, had taken on water and was trying to limp to port. An icebreaker, the 'Magadan', was still at the scene.

As night fell, an air search team was called off, and another was set to resume the quest for survivors the next day.

"With daybreak the search from the air will continue with an Mi-8 helicopter along with the sea teams," agency Itar-Tass reported an Emergencies Ministry official as saying.

The rig, built in Finland in 1985, had been working on a minor gas production project in the Sea of Okhotsk for a unit of state-controlled gas export monopoly Gazprom, the company said.

Russia's prize offshore gas and oil fields lie northeast of Sakhalin. Two major offshore projects are already producing oil and gas off the island: Sakhalin-1, operated by Exxonmobil and Sakhalin-2, in which Gazprom has a controlling stake.

The disaster is unlikely to seriously affect oil or gas production. AMNGR said the vessel was no longer under contract when it sank.

Operating conditions in the region, explored by Soviet geologists in the 1960s and 1970s, are among the harshest for Russian energy companies.

WINTER CONDITIONS
Winter often lasts 220-240 days in the waters off Sakhalin, where the main companies operating are ExxonMobil, Gazprom, and Royal Dutch Shell. They produce oil and gas, sometimes in icebound conditions, for export largely to Asian markets.

Sakhalin-2, in which Shell and Mitsui also have stakes, produces 10 million tonnes per year of liquefied natural gas at Russia's only LNG plant in the port of Prigorodnoye for export to Asia, much of it to Japan.

Each tanker of crude oil produced by at the 160,000 barrels-per-day Sakhalin-1 project, operated by ExxonMobil, is escorted by two icebreakers when ice thickness reaches 60 cm (2 feet).

State-controlled Rosneft this year reached a major deal with Exxon to explore for oil and gas in the Kara Sea, to the north of the Russian mainland, a largely unexplored region estimated to hold over 100 billion barrels of oil.

Poor infrastructure and chronic corner-cutting in Russia have contributed to several sea disasters, notably the sinking of the nuclear submarine Kursk in the Barents Sea in August 2000, in which all 118 aboard were killed.