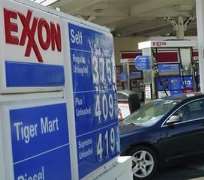 The newspaper said that Exxon is considering making an estimated 800 pence per share bid for Britain's Gulf Keystone, which has made huge oil finds in the semi-autonomous Kurdistan region of Iraq.

"It's not our practice to comment on media reports, rumours or speculation," an Exxon spokesman told Reuters in an emailed statement.

Gulf Keystone also declined to comment.
Exxon has "sounded out" Gulf Keystone about the possible deal, said the report without citing its sources, adding that it is thought that the company would not accept an offer at the 800 pence per share level.

Shares in Gulf Keystone closed at 165.5 pence on Friday, valuing the firm at 1.4 billion pounds.

Exxon became the first major to move into the northern Kurdish region in mid-October when it signed with the Kurdistan Regional Government (KRG) for six exploration blocks, a move which has angered the Baghdad government.

Baghdad has said any oil deals signed with the KRG are illegal.