Eurozone To Push On With Crisis Steps, Fitch Doubts Outcome 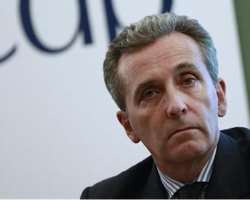 VITTORIO GRILLI, CHAIRMAN OF THE EU'S ECONOMIC AND FINANCIAL COMMITTEE, LOOKS ON DURING A NEWS CONFERENCE IN ROME JULY 28, 2011.
Listen to article

The euro zone will pursue measures to tackle its sovereign debt crisis this week by offering more cash to the IMF and long-term liquidity to banks, while moving towards tighter fiscal rules, after ratings agency Fitch cast doubt on it ability to forge a decisive response.

"We all know that Europe has not been able to convince markets that its governance set-up and its measures against the crisis were enough," Italian Deputy Economy Minister Vittorio Grilli said in a newspaper interview published on Sunday.

"More integration and more effective instruments are needed. We are not yet there," he told Il Sole 24 Ore.

Euro zone leaders agreed on December 9 to write into national constitutions a rule that budgets have to be balanced or in surplus in structural terms. If they are not, automatic corrective measures would follow.

But constitutional changes will take a year or more and markets want reassurance now that money invested in euro zone debt is safe, especially after banks were asked to accept a 50 percent loss on their Greek bonds in October as part of a second bailout of the country which sparked the debt crisis.

European leaders have belatedly insisted that the Greek case was unique and did not set a precedent.

To address market concerns that they do not have enough money to prevent the crisis from engulfing Italy and Spain, euro zone leaders brought forward by one year to July 2012 the launch of their 500 billion euro permanent bailout fund.

They also agreed to offer 150 billion euros in bilateral loans to the IMF to raise its crisis-fighting capacity.

Up to 50 billion euros more might come from non-euro zone European countries and possibly more from outside Europe.

Euro zone finance ministers will discuss at a Monday teleconference the draft text of the new euro zone fiscal compact so that it can be finalised by the end of January.

They will also consider the size of individual bilateral loans to the International Monetary Fund, in talks from 1430 GMT.

There are still doubts about this scheme. German central bank the Bundesbank said last week it would only contribute if non-euro zone and non-European countries did too and the level of outside commitment is not clear.

Leaders will decide in March if the combined lending capacity of the temporary fund, the 440 billion euro European Financial Stability Facility (EFSF), and the ESM, should be capped at 500 billion, or raised by the amount already spent by the EFSF.

"It is clear that in the short term, to fight the crisis of the single currency, the bailout instruments, such as the EFSF and ESM funds, must be reinforced," Italy's Grilli said.

Italy's austerity budget, vital for Rome's attempts to get its accounts in order and do its part to try to save the euro from collapse, enters its final stretch this week with unions still on the warpath.

SOLUTION "BEYOND REACH"
Market response to the December 9 summit has been cool, mainly because of the reticence of the European Central Bank to step up euro zone bond purchases and declare its willingness to do so.

"While acknowledging the extraordinary measures the ECB has adopted to provide liquidity to the European banking sector, its continued reluctance to countenance a similar degree of support to its sovereign shareholders undermines the efforts by euro area member states to put in place a credible financial 'firewall'," Fitch ratings agency said on Friday.

Other uncertainties also weighed.
"A week after the Brussels summit the basis of the agreement reached there has begun to unravel even more quickly than is normally the case," Emirates NBD bank said in a research note.

"Virtually all aspects of the deal appear to be being pulled and picked apart, from the degree of fiscal integration, the amount of firepower available for the bailout funds, and even to the support pledged to the IMF," the bank said.

"As a result the emphasis is likely to fall even more heavily on the ECB to keep the Eurozone system functioning."

The ECB, which is forbidden by EU law from directly financing government deficits, welcomed the December 9 agreement on more fiscal discipline in the euro zone, but doused expectations it would ramp up sovereign debt buying in return.

As a result, Fitch concluded that a 'comprehensive solution' to the crisis was technically and politically beyond reach.

COMMUNICATIONS NOT POLICY PROBLEM
Euro zone policymakers said ECB's role in the crisis was impossible to communicate clearly because of legal and political constraints. But they said the bank would not, in the end, allow the crisis to threaten the survival of the currency bloc.

A declaration from the ECB that it would buy unlimited amounts of euro zone bonds for as long was necessary would immediately calm markets, but would probably be illegal under EU law and would ease pressure on politicians to reform their economies.

"The ECB simply can't and won't say that, and it's very unreasonable to even expect it," one euro zone official said.

Instead, the bank was likely to keep quietly buying enough Spanish and Italian bonds to keep both countires on the market but with financing costs sufficiently high to pressure their lawmakers to quickly accept tough reforms.

"This is the most expensive approach, also not likely to work in the longer run, but still it is the only one possible," the euro zone official said.

But at the same time they created "perverse incentives" that reduced the pressure on single governments to adopt financial discipline, he said.

Instead of unlimited bond buying, the ECB will offer banks this week an opportunity to borrow money for three years for the first time, extending the current one year maximum ceiling for refinancing.

France hopes banks will use the money to buy euro zone bonds, and ease the upward pressure on yields, but Italy's Unicredit bank said last week this "wouldn't be logical" for banks under pressure to reduce risk and rebuild capital.

Fitch warned that six euro zone economies including Italy and Spain could be hit with credit downgrades in the near future. This is the second time in two weeks that the euro zone has been threatened with multiple ratings markdowns after a similar statement from Standard & Poor's.

Fitch said it might also cut AAA-rated France within two years. A poll showed French voters overwhelmingly fear serious damage to the economy if France loses its top rating, despite attempts by President Nicolas Sarkozy to reassure them such a blow would be surmountable.