KOK out, Segun Arinze in 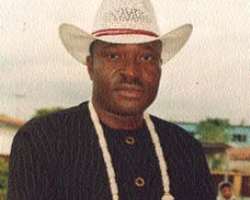 In an improper resolve to move the Actors Guild of Nigeria, AGN, forward after several months of leadership crisis, the Board of Trustees of the guild last weekend set aside the constitution of the body to uphold the election of Segun Arinze as the new president of the guild.
The Board also dissolved the Kanayo .O. Kanayo led care-taker committee, and set up in its stead, what it calls, a government of national unity to be headed by Segun Arinze and has a two year mandate to conduct the affairs of the guild.

Arinze last month in a controversial election conducted by the erstwhile president of the guild, Ejike Asiegbu and held in Port-Harcourt, Rivers State capital emerged a factional president of the guild. He was disowned by the Lagos State chapter of the body, which described his election as a “sham” labeling him a non-registered member of the chapter.

The care-taker committee, set up in June, this year to remedy the prevailing crisis rocking the leadership of the guild, after BOT had equally sacked the former president, Ejike Asiegbu has hardly completed it assignment before the dissolution came.

In a close-door press briefing, held at the guild's secretariat last weekend, the BOT chairman, Mr Ifeanyi Dike said, the advisory body has decided to take the step as a measure to end the crisis that is threatening the existence of the guild.
His address reads thus;

“I want to tell you that the rift in the actors' guild is over. We are tired of the crisis which almost threatened the existence of our notable guild. In a bid to finding lasting solution for this crisis and maintain peace and tranquility within the body we called on all state chapters chairmen to Lagos on the 6th of November for a truth and reconciliation meeting.”

'After studying carefully the resolution of all the twenty state chapter chairmen, who were present, the BOT invited other heads of some political groups within the guild; Mr. Emeka Ike(president aspirant), Mr. Kanayo.O.Kanayo interim president of the care-taker committee and Mr. Segun Arinze(president from Ejike Asiegbu led fraction, who at that meeting accepted the BOT should form a government of national unity as a way forward for the guild.

The BOT therefore after due consultation with other peace loving members of the Nollywood community resolve as follows:

*That all national election done and about to be conducted is hereby cancelled for the interest of peace and unity within the guild.

*That a government of national unity be formed to oversee the affairs of the guild for two years and conduct a national election for the interest of peace and unity.

* That any member of the national executive of the guild of national unity must for the interest of peace, unity and due process re-validate their membership of the guild in their respective state chapters.

*That no further election shall hold in the guild apart from the state chapters that are due for elections or where there are two state chapter executives in the state, br it appointed or elected but operates in isolation.

Meanwhile, stakeholders reacting to the new development have condemned the manner in which BOT handle the resolution as some executives who were elected alongside Segun Arinze were dropped in the process. Dropped is Mr. Chuma Onwudiwe who was elected National Secretary of the guild at the election that brought Arinze into office. How do we explain this?