WHY I PICKED ADMIRAL AS RUNNING MATE -DICKSON 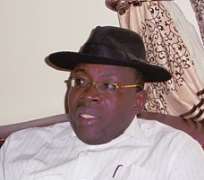 •Dickson
Governorship flag bearer of the Peoples Democratic Party (PDP) in Bayelsa state, Mr Henry Seriake Dickson, has broken his silence over the choice of his running mate for the February 2012 governorship election.

The PDP had last week submitted the name of Rear Admiral John Gboribiogha Jonah (rtd) alongside that of Dickson to the Independent National Electoral Commission (INEC).

The choice of Jonah was said to have caused disquiet in Dickson's camp, with some of his supporters grumbling of being used to discredit Governor Timipre Sylva and then sidelined.

However, Dickson during the official unveiling of Jonah at the PDP secretariat in Yenagoa disclosed that the choice of a running mate was arrived at after weeks of consultation and prayers.

According to him, considering the enormous task before his transformation agenda could be realized, he came to the conclusion that he needed a running mate that had the right kind of values that would inspire the transformation vision.

Recalling how he met Jonah, Dickson disclosed that since he indicated interest in the governorship race, Jonah had been of immense help in ensuring that his campaign was on course without thinking of gaining anything in return.

He commended the leadership of the party at the national and state level for their support and solidarity, noting that there was no going back on the mission to salvage Bayelsa.

His words: 'Immediately I emerged as governorship candidate, I began extensive consultation and on prayer guidance on the first critical decision I am expected to make, which was that of a running mate.

'This is the season of politics. There are many highly qualified and worthy persons in Bayelsa State. I consulted and made a decision that will place Bayelsa where it belongs. The lot fell on Rear Admiral John Jonah. I made that choice painstakingly.

'I also know that I will need a dependable deputy with the right sense of values. Being an Admiral, he knows how to steady a ship in the time of turbulence.

'I first met him while serving on the House committee. When he left service, we remained friends. When I declared my intention to serve, he was one of those that rallied round me without prompting. He also served as Head of Security Committee for the Restoration group, my campaign organization.

'With the few years I have had with him, I have no doubt that he is the right choice of a deputy. In the transformation agenda, there is no room for mediocrity. In the new Bayelsa we want to build, talent would be rewarded.'

The state PDP chairman, Deacon James Dugo, noted that the choice of Jonah as a running mate 'is a choice of God for the people of the state.'

He disclosed that the party had commenced preparation to host an official campaign flag-off in the state with national leaders expected, including President Goodluck Jonathan.