AYEMANOR: HOW WE CUT COST OF GOVERNANCE IN DELTA 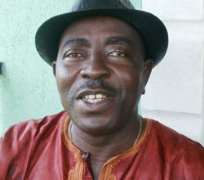 BY GAB EJUWA.
The name Lucky Ayemanor may not ring a bell in Nigeria's celebrity list, but in Delta State where he presides over the state's Direct Labour Agency, his contributions to the governance of the state is acknowledged. This Sapele born politician and  National Chairman of Niger Delta Peoples Network explains the importance of direct labour in cutting the cost of governance in the state.  Excerpts.

What is the Direct Labour Agency about?
Well, it is an interventionist agency set up by the Government to evaluate, monitor and maintain existing road networks, and all other sundry issues concerning development in the state.

In practical terms, what have you contributed to this agency?

Like what we intend to do, because if you traverse the length and breath of Delta State, you'd see that the roads are in terrible shape. So as part of our workplan, we've gone out to identify the problems those whose maintenance is overdue, those to be tarred and those to destroy outright.

The truth is we are still collating all these data and expecting funds from the Government. We intend to bring unprecedented development, improve upon what we met on ground. We're committed irrevocably to these ideals and because of our commitment, we're very sure this time around we will smile about the road networks in Delta State.

Is it only road you are into?
No, apart from overseeing the construction, monitoring and maintenance of roads, we act as a middleman between deserving individuals and corporate organisations who sell, hire out and lease tractors, bulldozers and other hardwares.

…Ayemanor
As national youth leader of the Urhobo Political Congress, your people have not been in unity for sometime now. Why?

Yes, it is unfortunate that within this period, the Urhobo people have not really found their feet. Of course, there are factors responsible, which are not unusual in any human society. Fact is, people tend to express their opinions individually to the detriment of the collective will - developments that have to do with over-ambition, psychosis and overzealousness.

However, we thank God that the people themselves have come to realize the importance of unity, which cannot be over-emphasized. And this newly-found unity is genuine. Before now, we had formidable goups like the Urhobo Political Forum and the Urhobo Community Forum.

For these two disparate groups being managed by heavyweight political gladiators to come together to say no let's collapse the two into one and form a formidable team that will speak with one voice is a turning point, which is why we the executives have decided to be more transparent and accountable and carry the entire people along. We therfore implore all Urhobo sons and daughters to rally round this group and shed their personal interests, for the benefit of the larger Urhobo Nation.

How does the Niger Delta Peoples Network fit in all of these?

Yes, the NDPN is a non-governmental organization. It is a heterogenous and coheisve network that believes in good governance, development of the Niger Delta, the corporate existence of Nigeria and these are the three objectives of the organisation. We celebrated the 10th Anniversary, wrapped up in a seminar in Benin , which has been reported in Vanguard and other media houses.

On the 17th of November, we gave awards to deserving sons and daughters of Niger Delta. We believe it is imperative to encourage individuals who have been instrumental to the development of the region so that we can spur others to do more.

The group is a non-violence group and we condemn any of its manifgestation in the society. That is why we make deliberate efforts to safeguard the well-being of youths from communities across the Niger Delta region. On the resolution of crisis, the group has organised and initiated seminars to entrench the culture of dialogue as the civilized way of resolving crisis and avoiding violence.

We stand unequivocally for peace that is why we have printed and distributed many leaflets to the youths. You will appreciate the fact that those who are deemed fit to receive the awards are those who have actually merited them.

What about funding? Who is footing the bill?
Well, this is a group of articulate men with like minds. We're up and doing and pay our dues. We don't have any problem with funding, even though we on principle, don't accept government funding. Neither do we have external sponsors. Our funds are generated internally. They come from our members since they believe implicitly in what we're doing.

Finally, what is your advice to youths in the Niger Delta?

The should keep the peace, development and fine-tune their potentials and cultivate dialogue as a means of resolving crisis.