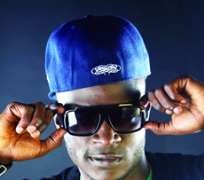 Nomzky
Onome Uduebor whose stage name is Nomzky has been around the entertainment industry since 2004 especially in Ghana, where he supervised the launch of many night clubs. The rap artiste, a graduate of Computer Science and Information from Leads Univeristy, Ibadan, Oyo State, has two singles, Success Call and Go Down Low, which have been ruling the airwaves since they dropped few weeks ago.

In this interview, the indigene of Ekpoma says he hopes to make it big in the industry, believing that top musicians will want to feature him in their songs after listening to his works. Excerpts:

Background
I hail from Benin, Edo State. I am from Ekpoma but I was born in Benin. I attended Word of Faith Primary School.  I don't know if you know anything about Benin but these are the good schools there. I went to private schools. Everybody is fond of saying grass to grace but I have really not known what grass is, that is why the title of my album is Grace to Gracious. I went to Brigade School. I also went to Lumen Christy, a Catholic school in Uromi. I did my secondary education there. From there, I went to the university in 2002. Actually, I was confused; I started with Medical Science in my year one. In year two, I studied Mechanical Engineering. I did not finish 200 level before leaving for Kwame Nkrumah University of Science and Technology, Ghana. I was there in 2004 and I studied Electrical Engineering for three years. I left there 2007 and came to Leads City University, Ibadan. I started 100 level in 2007 and by the grace of God graduated this year with a 2nd Class Upper in Computer and Information Technology.

From Kumasi to Lagos
I have been in the entertainment industry since 2004 when I was in Ghana. I have personally supervised the launch of several night clubs in Ghana such as Genesis Night Club in Kumasi and some movies. In 2006, I did a show in collaboration with a company, Black Sell Developers. Then I was schooling in Ghana and we did a comedy show to promote the soft sell using Okey Bakassi, Basket Mouth and a journalist from Nigeria. In 2007, I did a show with some of my friends and D'banj's younger brother, K- Switch. We brought D'banj and Mo'hits Records to Kumasi. I had to come back to Nigeria and started again so I just graduated from Leads City University.

Music time
Actually, I started singing since I was a kid but I just want to make it commercial and public now. I have been miming on stage since I was in the secondary school. Now, I have a promotional CD coming out and there are two songs in it. The first one is Success Call and the other is Go Down Low. By next week, the promotional CD should be out.

On my album
I cannot be precise for now as to when I will release my album. I am actually out to publicize my self as an artiste because people have known me either as a student or one thing or the other so, I need to first package myself as an artiste which is why I want to promote those two singles and before the year runs out or before February next year, I will have more singles to support these ones but I am working towards dropping an album.

Why I'm into rap
Basically, hip hop is like a culture. I have always liked rap. I think I have a positive message to channel to the people and my best way is rap. I don't have a melodious voice, I can't sing, I am not a writer, I am not a story teller but I can rhyme. Each song I hear, as the musician sings the song, I follow the beats. I sing my own in my head, in my own beats and it comes in a rap delivery.

M.I, Mode 9 and I
First of all, MI and Mode 9 are icons. I look up to them, I listen to their songs, I love them. I am not really coming to compete. I am confident in what I have and I will just play my role well. I think the people are supposed to be the judge if I deserve a stage in the music industry. Talking about confidence, I am a degree holder with a 2nd Class Upper so, if I choose to rap, I believe I know what I am doing. It is a personal decision. I am not hungry but it is what I want to do, it is my joy. When I was a kid, my dad used to force us to finish the calculations in New General Mathematics textbook during the 3rd term holidays. During these holidays, I would finish with the textbook and also have time for the radio. I do record songs on the radio from television programmes and I do write these lyrics so that I go back to school and mime so, I know I have to be focused in what I am doing.

Why I left promotions for singing
At a point in my life, I wanted to do something in the entertainment industry, I wanted to belong but I had education on my mind and it would be funny if I go home and tell my mum who has been taking care of me academically that I want to rap or sing when I am supposed to be coming home with results. I would sound distracted so I had to finish one. You can't serve two masters at a time. It was easier for me to do shows. I have this PR skill and I know how to relate with people, so that was it.

Making impact in music
That is the reason why I have been trying to come out with my music. I have always said if I can cross this hurdle of university education, if I can get that certificate, then I think I can tell the world that this is what I want to do because that is what everybody wants to know.

They want to know if you are strong enough to make a decision and funny enough, I won't say it regretfully, happily I am saying I am a graduate and it's a personal decision.

If you take a closer look at it, you will see I am not deviating from my field because embedded in my music is information and I simulate my voice with the computer so, I think I am still on the right track.