'MY HUBBY IS A GREAT COOK' 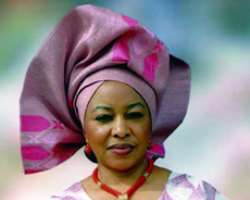 Exactly 30 years ago, Mrs. Victoria Ekhomu, a security expert, made a vow to love and to cherish her husband, Ona Ekhomu. And for all those years she was able to strike balance between her home and as well reach the peak of her career. Today, she is the Managing Director of Trans-World Security. She was appointed the Senior Regional Vice-President (Africa) of the American Society for Industrial Security (ASIS International) - the world's largest professional security body with over 37,000 members worldwide.

Having weathered the storm, Vicky took us down memory lane on how it has been and secret of their ever blossoming love.

How has it been all these years?
It has been good. I have been blessed with five wonderful children and a grandson. In a marriage, there are always ups and downs, and I thank God that we have weathered the storm and still stand strong. Marriage is not a bed of roses.

Can you recall how you met?
We met in Benin. I got a job with the News Agency of Nigeria (NAN) where I did my Youth Service Corp as a sub-editor. They gave me a permanent appointment to work in their Lagos office. I was supposed to start but took a week off to attend my cousin's graduation ceremony in Benin. I never came back. At the graduation, I stayed with my relations and during the reception, they all ganged up demanding to know who and when I was getting married. When I said no one was on the line, they insisted that I should relocate to Benin for fear that I could meet a Yoruba man. They wanted me to stay in Benin so that I don't get lost in Lagos. They prevailed on my mum that I should stay back in Edo. Although I was against it, I stayed back as an obedient child. I was convinced to live with my uncle who was living opposite my husband's family house. His sister, who is a family friend, took my picture to him and told him that I was the girl he saw across the road.

Was the attraction because he was recommended?
I did not know all the intrigues that were going on behind my back. He called the house and requested that the phone be given to me. When I picked the phone, he just said that I should come over. I said, 'who the hell are you to just ask me to come to your house.' I was very angry and banged the phone. They now said that it is mama's son that came back from America. When he saw me again, he said that he was doing his PhD thesis on Youth Corp service and that he learnt that I had just finished my youth service and that I should help him fill the questionnaire. That was how we got talking. We became friends and graduated to lovers.

How did you manage to weather the storms all these years?

As I said, we were friends before lovers and I had made up my mind to care for him. In marriage there has to be mutual love and determination by both parties to make it work. There will be different issues that would come up and they would be resolved because both of us were determined to make it work. We were frank to each other. I remember that at the time we were courting, my uncle said that he did not do any PhD but was a sports man but since I already knew him and believed in him, I just laughed it off.

What are those features that endeared him to you?
He is principled and that is one thing that I love that stood him out. He doesn't smoke or drink alcohol. They might be little but I saw them as fire pack. He never fell for peer pressure. That encouraged me to know that if he says 'I do' at the altar, he will take the vow seriously. I wanted a man that would give me support and everything not the other way round and God granted me that wish because I could be difficult sometimes.

Was he domesticated?
My husband is a great cook but I only enjoy his meals whenever we are in America. Reason being that in Nigeria, our so-called values do not encourage a man to cook for his wife but the truth remains that I feel so loved when my husband surprises me with breakfast in bed. It could be romantic. He is a loving husband. I always prayed for someone I will love with my whole heart that would love me back sincerely. If love is one-sided, it can be a struggle. I prayed that God should give me my own husband and I think God did that for me. Since we care for each other, we are able to tackle whatever problem that comes our way.

Your husband is the dream of every woman, how do you cope with advances from other women?

I have taken it like a bird. Allow it to fly, if it is yours, it will come back. You cannot cage a man. I also believe that a woman should also be allowed to move out. When you love each other despite the advances that come both ways, you respect the feelings of each other.

What is that little secret that kept you and hubby going all these years?

One of the things that we have done is working together. We supported each other; we are not out there by ourselves like most career women. Because of the demands of the job, most women don't get to be available and in the process, they drift apart. It can be challenging especially in Lagos. We tried to imbibe those little things that make marriage exciting. It was my mum that told me that no matter how busy, you must always find time to cook your food. I tried to imbibe that by making the soup and stew every weekend. Above all I sleep in the same room with my husband and that has helped us to settle whatever differences that crop up. Communication is our greatest weapon.

Why is the divorce rate so alarming?
At times there are irreconcilable differences, interference from in-laws. There is a lot of pressure especially these days that couples both work. They hardly get to see each other and they start drifting apart. Those days most women are not enlightened and do not know their rights and are made to believe that it is a taboo to walk out of your marriage. Today, women do not care. If love does not exist between them, any little thing will cause havoc.

Could it be because parents and relatives no longer assist in finding a partner for their children?

If you love each other and you are determined to make it work, and then it will work. One day, the parents that recommended your spouse would die and you bear your burden. Societal values have changed; it's not like before when if you are married, you do not want to be a single mother. Home Videos have destroyed a lot of homes as people practise what they see. These days, women are bread-winners and the man would refuse to swallow his ego and cause problem. Childlessness is another issue, the couple may decide to work it out but pressure from family and friends would come into it.

Why did you take interest in security?
Initially I was a teacher before we got married and travelled to US. Over there in US, I did my master's degree in security which was easy since my husband was into security. Meanwhile, my husband has a company called, Trans-World Security Consultancy and he was travelling across the globe. I was taking care of things whenever he travelled and gradually I took an interest in security and so far it has been good.

Is security really a man's world?
It is no longer a man's world as women have started coming into the business. Initially it was, and those days it was to my advantage. When I call manufacturers, they can easily remember my name because there are few women. Security is more of intelligence not brute force but having the knowledge to provide security. That is why I have got to the highest level of attaining my certification in the world. I am on top of my game.