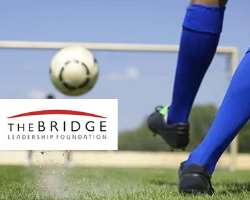 
The Community Connect for Youth Leadership (CCYL) Project is aimed at using the game of football to teach leadership and fair play skills among youths. Speaking during the project launch in Calabar, the Acting Executive Director of TBLF & CEO ThistlePraxis Consulting Limited, Mrs. Ini Onuk, who explained the need to empower young people through their areas of passion, added that, ‘football is a common passion for both the young and old and our strategy is to show that the game of football is way beyond scoring goals or winning tournaments’.


Also speaking, the Executive Director, Search & Groom for Youth Development who is the Project partner, Mr. Yomi Kuku, disclosed that the project will provide opportunities for youths in the state to be empowered and also compete on the world stage through a selection to participate at the 2012 Homeless World Cup in Mexico.


He maintained that by leveraging on the wide acceptance of sports as a means of social campaign, harmony and community regeneration, the programme will use the game of Football to teach Leadership and Fair Play skills for personal and community development by engaging young men and women between the ages of 16 and 23 years.


‘Search & Groom is happy to be in Cross River State and to extend this opportunity to young indigenes of the state. We also intend to direct and host other FIFA-affiliated projects in the state in the near future in partnership with the State Government as well as other well-meaning partners like TBLF’, Mr. Kuku added.


The Executive Director further disclosed that at the end of the tournament, three outstanding participants from the Community Connect Football Project will be selected to participate in the Homeless World Cup in Mexico scheduled to hold in October 2012.


He maintained that during the project, select workshops on Entrepreneurship, Leadership, Gender Violence and Community Engagement will be conducted in the mornings whilst football action will hold in the afternoons. The tournament matches with non-stop football action will hold between December 19 and December 23 whilst the tournament finals will be staged on December 24 with a special between the Executive Governor (with his Exco team) and a select team from the participants.


In just 6 months of it existence, the Bridge Leadership Foundation has achieved much in a bid to empower Cross Riverians. Amongst these efforts is the just concluded 5-day intensive Graduate Employability Training workshop for 80 graduates to prepare and improve their leadership abilities as well as equip them for the workplace. It hosted Career Day in July which drew renowned and dynamic young entrepreneurs from all facets of the economy and saw about 5,000 youths participating.


This is in line with its vision of building generations of young people educated to become compassionate, entrepreneurial and engaged citizens who are empowered to take responsibility for their own lives and for making a difference in the world.