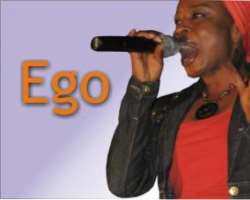 Singer Ego Ihenacho Ogbaro believes music has made her a deeper person. The petite lady was the only female vocalist with Lagbaja's band until she left to pursue a solo career in 2007. She was back-up for the masked musician on several tracks including 'Konko Below' and 'Nothing For You' but her soulful wailing in 'Never far Away', a track in Lagbaja's 'Africano' album, remains indelible in the minds of fans. Ego spoke with NEXT at a poetry event held recently.

The vocalist who sang the old anthem, 'Nigeria We Hail Thee' at the event with the theme 'Nigeria on My Mind', said she did so to know what people have in their minds regarding Nigeria; and because she believes she should talk about her country.

As the talk shifted to her music, Ego visibly relaxed. "I think the Nigerian music industry is evolving. Though we are yet to get there, we'll get there eventually and soon," she said. Her 'there', of course, being the time the music industry will become free of piracy and other problems affecting its growth.

Besides, Ego is also pleased that more Nigerian female musicians are coming up and changing the face of Nigerian music. "It makes things much better than it used to be," she said.

Asked how she handles overzealous fans, Ego thanked God that she has not encountered fans that are as crazy as to offer her a cup of their blood. "My lifestyle hasn't had to change because I don't hide. I try to be as normal as I am, there'll always be fans coming up to meet you but that is not necessarily a bad thing, it's all part of it," she added.

Not an easy task

Ego, whom many thought would have released her debut album by now urged patience on the part of her fans. "Getting an album out there is not easy because I have to do everything myself and then I think, I've waited this long, I can afford to wait a bit longer to make a real good album. So I intend to take my time but then, it will be out anytime soon."

It wouldn't be a surprise however if Ego whose wedding to her husband, Niyi Ogbaro was low-keyed, adopts the same style with the album.

Though she is no longer with Lagbaja, Ego has not exactly turned her back on the masked musician whom she regards as her mentor. In fact, she could still feature in any future album with him. "We are on good terms," she affirmed.

Assessing how her singing career has impacted on her person, Ego said, "My association with music has made me sit up and take note of lots of things which I might have been carefree about. I have learnt a lot from my singing career while with Lagbaja and even now that I am running my own band. On the whole, music has made me a much deeper person."