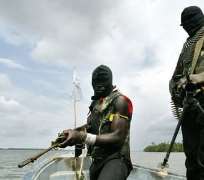 An Italian construction worker kidnapped in Nigeria's main oil region has been freed after being held for a day and following a ransom demand of more than $700,000, officials said Thursday.

"He was released on the 10th of December," said police spokesman Eguavoen Emokpae, adding he had been kidnapped a day earlier. He identified the victim as Carmelo Stella of a company called Moreno.

The secret police chief in the state, Andrew Iorkyar, said a more than $700,000 ransom had been demanded for the Italian who was project director for road construction work, adding four people had been arrested.

It was not clear whether any ransom had been paid following the kidnapping in the Ogbia area of Bayelsa state, part of the oil-producing Niger Delta region in Africa's largest crude producer.

Iorkyar told reporters he was rescued from Ogbia waterways after his kidnappers had demanded the ransom.

Scores of kidnappings for ransom of foreign workers have been carried out in the Niger Delta, though a 2009 amnesty deal led to a sharp decline in unrest there. Sporadic incidents continue to occur despite the amnesty.

Bayelsa state is in the run up to a controversial governorship election.