SUBSIDY TO WAIT FOR NOW -OKONJO-IWEALA 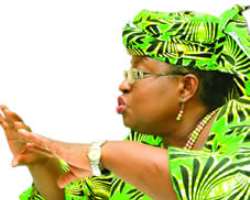 • Okonjo-Iweala
The Federal Government has backed down on the removal of fuel subsidy, at least in the interim, even as it plans to merge Ministries, Departments and Agencies (MDAs) to save costs, Finance Minister, Dr. Ngozi Okonjo-Iweala, said in Abuja yesterday.

Mrs. Okonjo-Iweala, who also doubles as the Co-ordinating Minister for the Economy, said government had temporarily jettisoned the idea to allow for 'wider consultations with stakeholders.' The government, earlier in the year, had indicated its intention to hands-off the payment of subsidy on fuel, notably petrol and kerosene, in a bid to free up funds for capital expenditure in the 2012 budget.

The Presidency had hinged its policy reversal on the huge sums (about N1.4trillion) it was investing in the fuel subsidy regime, and instead pushed for the deregulation of the downstream sector, which meant an end to fuel subsidy and by extension, an increase in the pump prices of the two products.

'The Federal Government has backed down on the removal of subsidy and resorted to wide consultations with faith-based organizations, youth groups and other stakeholders and after that, the government would make a pronouncement on the issue,' Okonjo-Iweala said.

'The President is consulting widely and at the appropriate time, he will take a decision,' she added. Labour had been so fierce in its campaign against the policy, given the untold hardship it would bring on the masses. The Finance Minister, who was giving a breakdown on the budget presented on Tuesday to the National Assembly by President Goodluck Jonathan, had declined to state whether the fuel subsidy removal issue was finally rested or when it would be revisited.

She also disclosed that government had uncovered over N1 billion hitherto enjoyed by police ghost pensioners.

Okonjo-Iweala announced that the Federal Government would restructure and merge some MDAs whose functions are overlapping, with a view to reducing the cost of running government. Already, a committee had been set up to look into ways of merging or restructuring the agencies. Making these disclosures at the budget breakdown in Abuja, the minister said that following the reforms embarked upon by the government, police pension overhead was brought down from N1.5 billion to N.5 billion.

This, she said, was achieved through a biometric data system of payment. The budget whose theme is: 'Fiscal consolidation, inclusive growth and job creation', she said, is an action budget and many of the actions captured inside have already begun. This, Okonjo-Iweala, said, could be seen in the amount voted for security, agriculture, etc.

'This is a serious budget with a serious purpose which will be implemented with a serious approach. Nigerians are tired of talk and so are we. That's why the budget is all about action in the areas that matter to Nigerians. There is no big grammar in this budget' the minister said.

To buttress the 'action' theme, she cited the significant scale-up in the allocations made to some key sectors such as power, security, agriculture and infrastructural development. She said that there is a strong basis for progress in these and other areas based on this budget. According to her, the 2012 budget would be standing on four pillars which include, macro-economic stability, structural reforms, governance/institutions and investing in priority areas. These, she said, were established to help achieve fiscal consolidation, inclusive growth and job creation.

The minister identified key initiatives and developments, which will form a key part of government's focus.

This includes plans to reduce domestic debt profile which stands at 16.4 per cent with more attention being paid on revenue side. This, according to her, would involve blocking leakages, improving corporate tax collection and boosting internally-generated revenues.