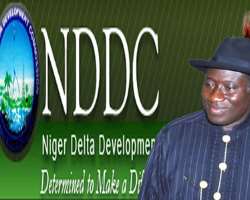 During the Senate confirmation of the reconstituted Governing Board of the Niger Delta Development Commission, NDDC, and its subsequent inauguration by President Goodluck Jonathan some far-reaching comments came forth. In particular, President Jonathan and Senate President David Mark helpfully enjoined members of the new board to avoid the mistakes of their predecessors by working together, and not asunder, in order to enable the interventionist agency perform to expectations of its numerous stakeholders. Such advice, from very high echelons of the Federal Government clearly demonstrates the enormity of the tasks ahead of the Dr. Tarilah Tebepah-led board. It also underscores the crucial need for good corporate governance in NDDC and probably other public sector organisations.

Moreover, one inference can be made from the counsel by Jonathan and Mark to the new board of NDDC. It is that the NDDC cannot act with effect except the Governing Board acts in concert, despite the plurality of views its diverse composition may generate. In a related but wider context, prolific management guru, Peter Drucker, once suggested that modern society’s performance is organisations-reliant and management-dependent. Drucker’s suggestion is very apt for the NDDC. This is because several significant developments in the external environment in which NDDC operates heighten the utmost necessity for the Commission to deliver good quality human and infrastructure development projects to “the highly beleaguered Niger Delta,” as Professor Wole Soyinka described the region during a visit to the NDDC.

One of these environmental triggers is the Federal Government’s Vision 20:2020. In order for Nigeria to attain the lofty vision of being one of the world’s top 20 economies by 2020, NDDC must rise to the daunting challenge of facilitating the speedy development of the Niger Delta. Moreover, before the introduction of the Federal Government’s amnesty programme, the absence of peace in the region used to be cited as a major impediment to development in the Niger Delta. That argument can hardly hold water today, as relative peace now prevails in the region. Above all, the Federal Government’s transformation agenda for improving the fortunes of this country places enormous performance demands on the NDDC.

Consequently, but without demeaning the roles of NDDC rank and file, as well as middle, senior and top management employees, the new board has a monumental responsibility to provide strategic leadership for the Commission to perform better. Indeed, many corporate collapses have been attributed to ineffective boards and disunited executive management teams whose members failed to work as one. This is the crux of the matter and the critical challenge for Dr. Tebepah and his colleagues. However, this challenge is intertwined with a tremendous opportunity for them to make a difference. In addition, they stand a chance to leave indelible footprints on the sands of time. Theirs is akin to a national call to avert a calamitous collapse of a promising organisation that has the potential to make the Niger Delta measure up to stakeholders’ expectations. But for them to act as a tonic to the NDDC they may need to draw on tested tenets of corporate governance.

One of these is the Cadbury Code of Best Practice published in 1992 based on the recommendations of a Committee set up in the United Kingdom in 1991 and headed by Sir Adrian Cadbury. This document advocates “clearly accepted division of responsibilities at the head of a company, which will ensure a balance of power and authority, with no individual having unfettered powers.” Although NDDC is not a company, its Governing Board has a Chairman, a Managing Director, two Executive Directors and several non-executive Directors. In order to truly make a difference, the board members will need to really ensure separation of the two key roles of Chairman of the Board and Managing Director/CEO of NDDC.

Elsewhere, Cadbury, an authority in corporate governance spells out roles of the board chairman, non-executive directors and company secretary. He situates responsibility for effectiveness of the board in the bosom of the chairman. He emphasises that board effectiveness requires the efforts of all members, but above all coaching and leadership by the chair. Cadbury suggests that the chairman is responsible for running the board; a responsibility that is quite distinct from that of the CEO for managing the organisation.

According to Cadbury, the non-executive directors have an equally key role, given their expected distance from the day-to-day management of their organisation. They are in a vantage position to objectively review the performance of the CEO and the executive team. He also suggests that the varied experiences they bring on board are of particular value in strategy formulation. There is no question about it; the new board is composed of extremely experienced people and this strength needs to be effectively maximised with mutual understanding. Cadbury also suggests that board members should seek from the board secretary impartial and professional guidance on their responsibilities.

Similarly the Higgs Report (2003), also issued in the United Kingdom, put forward some characteristics of an effective board. One of these is a chair who has a strong, complementary relationship with the CEO and other members of the board. Another is a culture of openness and constructive dialogue in an environment of trust and mutual respect.

One major shortcoming of the immediate past board was disunity among the top three executives. Indeed, the recently retired Executive Director, Finance and Administration, Mr. Power Aginighan, last week described himself as “one of the dramatis personae in the drama of irreconcilable differences that culminated in the dissolution of the last Governing Board.” Their wrangling was more damaging because as executive board members, they were expected to drive implementation of strategies crafted by the board. Consequently, it may be worthwhile for the new MD/CEO and the two Executive Directors to also draw on best practices pertaining to the operation of top management teams. Recent studies revealed that a high level of mutual understanding and collaboration among members of top management teams and their participation in strategic decision making promote the quality of strategic decisions and facilitate implementation. In addition, meeting regularly as a team has been found to improve communication and cooperation among top management teams.

Above all, it is pertinent to refer to the title and contents of a book by Bob Garrat, that focuses on the functioning of boards of directors- The fish rots from the head. We hope that will no longer be the lot of NDDC with the coming of the new board. Hence, it is extremely encouraging that Dr. Tebepah and the new Managing Director, Dr. Christian Oboh, have promised that members of the new board and executive management will all work with team spirit.