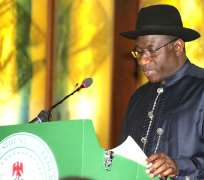 … President Seeks Approval For Sack Of Gwaska As FCC Commissioner

The 2011 NDDC estimates of expenditure and income which represents 4.64 percent increase compared to 2010 was contained in a letter to the Senate read by Senate President, David Mark.

Meanwhile, in a letter to the Senate, the President also asked senators to approve the sack of Alhaji Muhammed Ari Gwaska as commissioner of the Federal Character Commission, FCC for gross misconduct.

“Alhaji Gwaska has consistently refused to respect lawful directives, absented himself from without authorization, unlawfully retained two official cars and some strategic official files of the commission in his private custody and has remained unwilling to subject himself to constituted authority, thus creating an atmosphere at the commission which may encourage rancour in the system with its attendant negative effect on the efficiency and service delivery.”

Jonathan urged the Senate to give expeditious treatment to his requests.