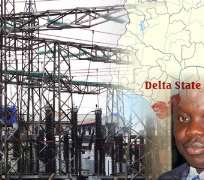 SAN FRANCISCO, December 14, (THEWILL) - The Federal Government has issued to Delta State, a license to enable it generate about 450 mega watts of electricity through its Independent Power Plant (IPP).

The State Governor, Dr. Emmanuel Uduaghan who announced this while receiving the license from General Orho Obada (Rtd) during the swearing in ceremony of a Special Adviser in Asaba, said the License would enable the State Government boost electricity supply independently.

Dr. Uduaghan explained that power generation and distribution before now was the monopoly of the Federal Government but expressed delight at the turn of events where the energy sector has been liberalized and the door opened to private sector participation.

He said the State Government took advantage of the liberalization and registered the Delta Electricity Power Limited so that the state could have its independent power plant and generate energy to improve electricity supply in the state.

“This now led to the State Government registering a company Delta Electric Power Limited, a private partnership to enable the state have its own IPP and generate power to improve on power supply in the state.

“Federal Government has given us this license to generate power, when we complete our IPP, we will start by generating 120 mega watts and gradually increase to 450 mega watts. This will help solve the power challenge in the state,” the governor stated.

Governor Uduaghan added that the IPP would attract investors to the state stressing that nine (9) areas have been mapped out where investors could invest.

“We are the only state that has been given this license. We believe in planning and have mapped out nine areas where investors can invest. With constant power supply in the state, it will enhance economic growth in the state," he said.

He advised the new Special Adviser, Comrade Mike Okeme to live up to expectations in his new responsibilities and key into the Three Point Agenda of the State Government in order to harness the resources of the state for the benefit of Deltans.

Dr. Uduaghan noted that the policies and programmes of his administration were focused on empowerment and wealth creation saying, “Our policies and programmes are clear and focused, we are committed to building world class infrastructure that can facilitate economic growth and also create a Delta that would survive without oil.”

“Your years here in the State as NLC Chairman were marked by peace, understanding and mutual respect and a most rewarding period for workers. These values we want to continue to harness, so that our state will continue to enjoy peace and progress.”

In a brief response, Comrade Mike Okeme thanked the Governor for finding him worthy to serve Deltans and pledged his loyalty to the Government and people of the State.

He promised not to betray the trust placed on him saying, “I am ready to work, I am ready to serve Deltans in my capacity as a Special Adviser to the governor on Labour and Industrial Relations.”