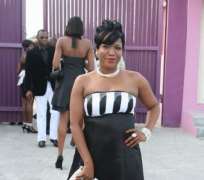 She played a minor role in Tade Ogidan's new flick (Family on Fire).She featured in the movie alongside other top actors like Saheed Balogun,Shola Sobowale,Sola Fosudo,Segun Arinze and others.

According to KSB, I just featured in a movie (Family on Fire) produced by the legend,Tade Ogidan.He cast me in it.

It was really interesting.I didn't have much problem saying my lines because of the wonderful people I worked with.They really helped me a lot.The executive producer was quite encouraging. She said.

Asked,have you been acting before;she said No.I was just invited for this one.But the truth is that I can act,do comedy and MC.I'm just gifted.I believe the producer saw that talent in me.

KSB also revealed that she would do everything to shuttle between her busy schedules and movie location schedules.