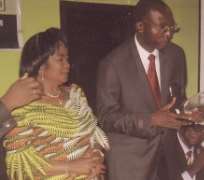 Nsukka, the serene University of Nigeria (UNN) town, Enugu State, recently came alive as prominent citizens of Nsukka cultural zone gathered for this year's Diamond Annual Lecture. Being the seventh in the series, the theme of the lecture was, 'The place of Nsukka in the development of Nigeria.' On hand to chair the annual event, which has become a rallying point, was the President, Nigerian Institute of Management (NIM), Dr. Sally Bolujoko.

The guest lecturer was the Director, Institute of Development Studies, UNN, and former Economic Adviser to the President / Minister of National Planning, Prof. Osita Ogbu, while the keynote speaker was Dr. Nick Idoko, President/lead consultant, Africa Network for Peace and Justice (ANPeJ and a senior lecturer at Pan African University, Victoria Island, Lagos.

Ogbu stressed the need for people of the cultural zone to develop a knack for internal self-examination that ennobles and empowers without feeling that such expose undermines their collective self-pride. He reasoned that such undue sensitivity had denied people of the area the opportunity to search for truth that is liberating and would engender collective action.

He said a lot of people walked around with the wrong attitude, hoping against reason to positively alter their social and economic well-being and cautioned that bad attitude was self-inflicted.

The don x-rayed development from an ideological standpoint that emphasises incremental material well-being as a good measure of how far removed Nsukka people are from the material conditions of their ancestors:

'Our challenge is how to forge links, form cooperative entities and support structures that weave strength around individual capabilities and to develop the right attitude that allows us to resist oppressive activities and values, enforce our rights, develop our entrepreneurship, and exploit our knowledge, skills, and ecology to develop ourselves and pursue the civilization of love and happiness. From the vast virgin lands of Uzo-uwani to the rich clay soil of Isi-uzo, our lands beckon all those enterprising enough to exploit this untapped treasure.'

The don was unequivocal that three major commercial crops of rice, cashew and Ose Nsukka have the potential to transform the cultural zone. He said that rather than produce economic merchants and entrepreneurs, the system is producing political entrepreneurs, willing to borrow and invest in the political process. Ogbu regretted that some were willing to dispose of their assets in search of the elusive political glory and reward arguing that many have been rendered destitute because of misplaced adventurism:

'In the recently concluded PDP chairmanship primary exercise, about 60 persons from Nsukka procured the chairmanship forms from the PDP at N400, 000 per person for the seven slots that were available. That is N24 million. If you add another N6m as expenses incurred during consultations etc, you would have easily N30m that would have gone into the commercial production of Ose Nsukka or rice in Adani. This is more than the amount you need to establish a microfinance bank. It is more than the amount we need to transform the lives of 300 widows from Nsukka on a permanent basis.'

He also noted that the second pillar in the zone's resource accounting is knowledge as Nsukka is endowed with intelligent men and women: 'The number of educated is important but the society must feel the impact of the number. Our paradox seems to be that the more educated we are, the more oppressed we have become or frightenly the more accepting of oppression we have become.

'From the economic, political to the spiritual domain, we seem to throw-up our hands in the air and uncritically accept that which goes against our reason. We accept when candidates which are not of popular choice are imposed on us by political forces outside our domain to govern us, and we do not even put up a fight. We accept when petrol dealers collude to cheat us of our hard-earned money; when the Church told us that we must conduct Church wedding before traditional marriage, against our tradition and sensibility, we grumbled and embraced it.'

In his keynote address, Idoko recalled that the pervasive treatment and marginalization of people of Nsukka cultural zone, which according to him is even felt today, dates back to 1920s when the Nigerian Spokesman newspaper called Nsukka district, 'the sick child of the province' due to the lagged response of people of the area to the stimuli of education and development.

Nsukka people especially native authority staff, he said, had reason to be unhappy due to the discrimination they suffered in the area of promotion and career advancement.

The don said the fate of people of the area has become what he referred to as the Sisyphean complex regretting that in just a decade, Nsukka zone suffered calamitous policy somersaults such as the relocation of the Enugu State University of Science and Technology (ESUT) Medical School from Nsukka to Enugu, closure of ESUT in Adada and assorted discriminatory policy measures especially in government appointments:

'Nsukka area has suffered and still suffers from a complex of multiple marginalizations as an integral part of Igboland and Nigeria. Nsukka area was marginalised in the urban settlement activities in both the colonial and post-colonial eras. Nsukka area was excluded from the financial nexus of the emergent Nigerian macro-economy which produced the first landlords in Enugu, Onitsha and Port Harcourt, major cities of old Eastern Nigeria.'

President of the club, Mr. Frank Agbedo said the choice of the year's topic was a product of critical thinking borne out of the desire to showcase the huge but largely untapped human and natural resources that abound in Nsukka and its environs:

'We have delivered on the ambitious objectives of these lectures, which seek to sensitize and draw the attention of the leaders and policy makers to the plight of the people, with a view to proffering solutions to these problems and challenges.'

He explained that Ezike Diamond Club, Nigeria, is a non-partisan and non-governmental organization founded by a group of professionals of Enugu Ezike origin based mainly in Lagos: 'Members are essentially bound by a common desire for self-actualization, distinction and excellence in their private lives and profession.'

Part of the highlights of the event was the award of excellence in legal practice to Fabian Ajogwu (SAN).