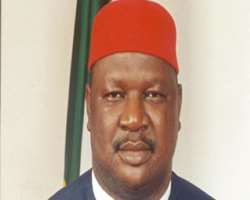 SECRETARY TO THE GOVERNMENT OF THE FEDERATION (SGF), SENATOR ANYIM PIUS ANYIM.
Listen to article

PORT HARCOURT, December 13, (THEWILL) – The Department of State Services (SSS) has detained two persons it described as high profiles dupes for impersonating the Chief of Staff to the President, Chief Mike Ogiadomhe; Secretary to the Government of the Federation (SGF), Senator Anyim Pius Anyim and the Managing Director of the Niger Delta Development Commission (NDDC), Dr. Christian Oboh while also dropping the names of President Goodluck Jonathan.

One other suspect, Tony Allagoa described as leader of the syndicate is currently at large.

The alleged dupes were paraded before correspondents in Port Harcourt, Rivers State Tuesday by the Director of the Command in the State, Mr. Segun Agbaje.

The SSS director said, “Between 30th November and 2nd December, 2011, two members of a notorious gang of fraudsters, identified as Amil Ayekimo Avery, from Bayelsa State and Mohammed Ogwurude, 42, from Benue State, were arrested in respect of an attempt to defraud the Managing Director of Diamond bank, Dr. Alex Otti, of N40 million.

“The leader of the gang, Tony Allagoa, who is at large, had contacted the bank chief on 17th October, 2011, claiming to be the SGF. In the subsequent telephone messages, especially that of 16th November, 2011, Allagoa still posing as the SGF, informed Otti that he had just concluded a meeting with President Jonathan.

“Allagoa required Otti to pay N40 million into two separate accounts in Bank PHB (now Keystone Bank) and GT Bank, to assist him and his bank with business, giving his position as the SGF and his closeness to the President.

“The subsequent change of mode of payment of the said amount from bank to cash and a sting operation conducted by the command, led to the arrest of Avery at Hotel Presidential, Port Harcourt, when he came to collect the amount of money, on behalf of the syndicate.

“Ogwurude with over N12 million passing through his account, whose bank account had been used severally by the syndicate to receive payment, was subsequently apprehended.

“In the course of further investigation, it was discovered that the same gang had severally dropped the name of Chief Oghiadome, between December 2010 and March 2011, to defraud prominent Nigerians in the South-West of various sums of money.”

It is however not clear when the men will be charged.