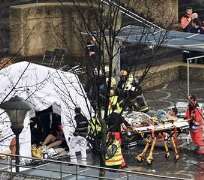 A man opened fire with an assault rifle and threw grenades in the Belgian city of Liege on Tuesday, staging an attack in which two people died including the gunman himself, officials said.

About 64 people were injured in the center of Liege, which is about 90 km (55 miles) east of Brussels, officials said.

The man attacked near a bus stop at Place Saint Lambert, a central shopping square which is the site of the city's Christmas market and its main courthouse. It was not clear how the attacker had died.

Gaspard Grosjean, a journalist for local Liege newspaper La Meuse, ran over to the square just after attack.

"We saw people with bullet wounds in their shoulders, their hands," he said, adding that he had seen one dead body. "I see people completely scared, people are crying, everyone is on their phones."

A museum on the square said it had taken in injured people.

"I can say there were injured, but don't ask me if it's five, seven, eight or nine. I don't know," said Jean-Jacques Messiaen, director of the Archeoforum museum.

A spokesman for Belgium's crisis center said ambulances had been called in from neighboring the Netherlands.