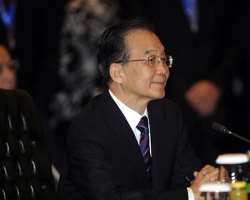 CHINESE PREMIER WEN JIABAO ATTENDS THE ASEAN-CHINA COMMEMORATIVE SUMMIT ON THE SIDELINES OF THE ASEAN AND RELATED SUMMITS IN NUSA DUA ON THE INDONESIAN ISLAND OF BALI NOVEMBER 18, 2011.
Listen to article

China's premier will visit Myanmar next week for a summit of Mekong River countries, sources familiar with planning for the meeting told Reuters on Tuesday, opening the way for Beijing to shore up ties with a neighbor that has lately courted Washington.

Beijing has long been Myanmar's closest partner, supporting the secluded state during decades of Western sanctions, although it has been angered by its decision to suspend a hydro-power dam built with Chinese backing.

President Barack Obama decided last month to open the door to expanded ties, saying he saw potential for progress in a country until recently seen as an isolated military dictatorship firmly aligned with China.

However, a U.S. envoy in Beijing said on Tuesday Washington was not looking to undermine China's stake in Myanmar.

Two sources familiar with Chinese planning who confirmed Wen's upcoming trip spoke on condition of anonymity. They were unable to confirm whether Wen will also make a full-scale bilateral visit to Myanmar.

However, the Greater Mekong Sub-Region (GMSR) meeting will at least give him a chance for informal discussions with the country's leaders. Cambodia, Laos, Thailand and Vietnam also share the Mekong River and are included in the grouping.

At a daily briefing in Beijing on Tuesday, Foreign Ministry spokesman Liu Weimin said he had "no information" about whether Wen would visit Myanmar soon.

The Myanmar government website (www.4thgmssummit.gov.mm) said leaders were scheduled to gather in the capital, Naypyitaw, on Monday and Tuesday, although the website did not identify which leaders would attend.

HALF A CENTURY OF ESTRANGEMENT
Clinton met President Thein Sein during her visit this month, as well as pro-democracy leader Aung San Suu Kyi.

Her visit marked a tentative rapprochement after more than 50 years of estrangement between Myanmar, formerly known as Burma, and the West.

"There is no intent of the United States in its relationship with Burma to have any certainly negative influence on Burma-China relations," envoy Derek Mitchell said at the end of a brief visit to Beijing.

"It is not in the interests of the United States that Burma have tense relationships with its neighbors. China and Burma have a long history as well as a long border."

China still has a major stake in maintaining influence and goodwill in Myanmar, despite the political transformation that made Clinton's visit possible.

The West imposed broad sanctions on Myanmar's military rulers after a crackdown on pro-democracy protesters in 1988 and China stepped into the void, offering aid and weapons and ramping up trade.

Bilateral trade rose more than half last year to $4.4 billion and China's investment in Myanmar reached $12.3 billion in 2010, with a strong focus on natural resources and energy projects, according to Chinese figures.

For Beijing, Myanmar is also a geo-political asset, giving it potential access to the Indian Ocean for imports of oil and gas and exports from landlocked southwestern Chinese provinces.

But it has been Myanmar's apparent willingness to release most, or possibly all, political prisoners and hold by-elections for parliament that have allowed greater contact with the West.

On Tuesday, one of Myanmar's most influential commentators told Reuters in Singapore that such moves should pave the way for the lifting of economic sanctions by the European Union and soon after by the United States.

"There could be a major release of most, if not all, political prisoners in January and then by-elections in February or March, Thant Myint-U said in an interview.