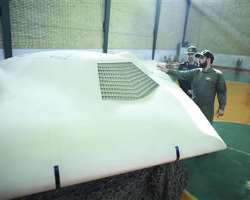 AN UNDATED PICTURE RECEIVED DECEMBER 8, 2011 SHOWS A MEMBER OF IRAN'S REVOLUTIONARY GUARD (R) POINTING AT THE U.S. RQ-170 UNMANNED SPY PLANE AS HE SPEAKS WITH AMIRALI HAJIZADEH, A REVOLUTIONARY GUARD COMMANDER, AT AN UNKNOWN LOCATION IN IRAN.
Listen to article

President Barack Obama should apologize for sending an unmanned spy plane into Iranian territory rather than asking for it back after it was seized, Iran's Foreign Ministry spokesman said on Tuesday.

Iran announced on December 4 it had downed the spy plane in the eastern part of the country, near Afghanistan. It has since shown the plane on television and said it is close to cracking its technological secrets.

On Monday, Obama told a news conference: "We have asked for it back. We'll see how the Iranians respond." Iranian officials had already said they would not return the drone.

"It seems that (Obama) has forgotten that our air space was violated, a spying operation conducted and international law trampled," Foreign Ministry spokesman Ramin Mehmanparast told a news conference.

"Instead of an official apology for the offence they have committed, he is raising such a demand. America must know that the violation of Iran's air space can endanger world peace and security."

Defense Minister Ahmad Vahidi told the official IRNA news agency: "The U.S. spy drone is the property of Islamic Republic of Iran. Tehran will decide what it wants to do in this regard."

AGGRESSOR AMERICA
Parliament issued a resolution calling the drone incursion "evidence of international terrorism and a blatant violation of international law by the aggressor America," and said Iran might seek reparations from Washington.

Iran has already complained to the U.N. Security Council about the incursion, calling for action to "put an end to these dangerous and unlawful acts.

NATO's International Security Assistance Force in Afghanistan initially said the plane may have been an unarmed U.S. reconnaissance drone that went missing during a mission over western Afghanistan.

But a person familiar with the situation has since told Reuters in Washington that the drone was on a surveillance mission over Iran.

The drone affair is just the latest incident adding to tensions between Iran and the West which accuses the Islamic Republic of trying to develop nuclear weapons, a charge it denies.

Iran's judiciary announced on Tuesday it had issued indictments against 15 unidentified people held on suspicion of spying for the United States and Israel, the official IRNA news agency reported.

Iran said in May it had arrested 30 people it said were spying for the United States. Spying in Iran can be punishable by death.

In response to tightened economic sanctions against Iran, radical youths stormed the British embassy in Tehran on November 29, causing London to recall all its staff and close its mission.

Republican presidential candidates in the United States have upped rhetoric on a possible military strike against Iran, something Israel says it may carry out as a last resort to stop the Islamic Republic getting the bomb.

"It's better that they don't use phrases like 'all options are on the table'," Mehmanparast said, referring to the stock phrase used by Israeli and U.S. leaders about the military option.

"The phrase has been used so often it has become tiresome," he added.