EXECUTIVE PROFLIGACY AND THE FUTILITY OF EATING CASSAVA BREAD 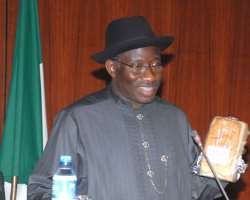 Only few days ago, the Nigerian President – Dr. Goodluck Jonathan had remarked as follows: “I promised Nigerians a Transformation Agenda and that means change… Thus, if we must have transformation (and we will have it) there must be changes in how we do things.” Basking in the euphoria of his transformative confessions, the President proceeded to dramatize to all Nigerians the puritanical benefit of cassava bread by stating that: “In the last two weeks, I have been eating only cassava bread and I will continue to do so until I leave the State House.”

Going through this breakdown, is there anything that truly suggests that President Jonathan has been eating cassava bread for the past two weeks? Does it really make any sense or meaning for the President to admonish Nigerians to cultivate a patriotic appetite for cassava bread while he busied himself with the escapade of lavishing almost N50 million naira just to maintain dogs and horses? By the way, who says dogs cannot eat cassava bread?

The word “transformation” is too sacred and quite serious a concept for it to be trivialized and reduced to the pedestrian level of being invoked promiscuously and opportunistically without a corresponding demonstration of strength of character and discipline of mind to match action with words. When seriously posed, “transformation” demands a radical departure from the way and manner the presidency and all other institutions of government conduct the affairs of governance. It requires, among other things, a drastic reduction in the prohibitive cost of governance as well as a shift towards greater accountability, transparency and minimization of wastages in public spending. Above all, transformation entails a conscious and pragmatic effort by the political leadership to empower ordinary Nigerians so that they can be able to realize their full aspirations and potentialities as legitimate citizens even as they also participate meaningfully in the arduous task of nation-building.

Accordingly, any government that understands what transformation entails and is serious about it will go out of its way to invest heavily and massively in the education, health, social welfare and economic empowerment of its general populace, realizing that it is only when its citizens are so empowered that they can become veritable assets in the task of national development. Regrettably, what obtains today is a situation where governments (both State and Federal) are renouncing their responsibilities in regard to the welfare and security of their citizens even as they continue to flirt with the idea of being committed to transformation. One classic example of this odious phenomenon will suffice: The Lagos State government recently announced a 700% increase in tuition fees for the state-owned university which will compel fresh students to pay as much as N300, 000 from the N25, 000 being paid. In justifying the arbitrary hike, the governor of the state had argued that universities in Ghana and United Kingdom are populated by Nigerians who are willing to pay through their nose to acquire education.

This defence by the governor is not only grossly insensitive and bereft of an appreciation of the historical peculiarities of those societies, but also exposes a mindset which propels government to relinquish its responsibility for the defence and protection of the interest of the poor, the weak and the defenceless citizens of our society. Let us also bear in mind that the basic conditions for social and economic existence in those other societies are comparatively tolerable and beneficial than what obtains in our own harsh environment. If there is anything such a draconian policy will achieve, it is the fact that it is going to abort the dreams of many families (with meagre income) of having their wards acquire tertiary education in the state. The craze for bigger revenue generation has been given inordinate priority over and above the imperative of guaranteeing the welfare and empowerment of citizens through meaningful access to education.

It has become highly compelling for Nigeria’s governing elite to appreciate that “governance” and the interests of ordinary Nigerians are not mutually exclusive. Indeed, the only reason for the existence of government is that it should be highly functional in the defence and promotion of the well-being of these citizens as well as initiating policies that will uplift and empower them to become useful citizens. Invariably, government becomes utterly meaningless if its citizens are abandoned to the vagaries and vicissitudes of a precarious existence characterized by survival of the fittest.

What is needed by way of transformation is for the President to exhibit exemplary leadership and uncompromising determination in plugging all known avenues for wastages, corruption and mindless looting of the country’s treasury and resources. He should demonstrate zero tolerance for corruption by making sure that corrupt public officials are exposed and punished squarely to serve as a deterrent. For it is only by doing so that the President can reassure himself and the rest of Nigerians that he is not merely eating his cassava bread with a mouth full of corruption!