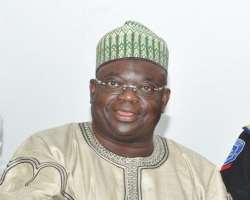 ABUJA, December 12, (THEWILL) - Chairman of the Northern Governors Forum and Governor of Niger State, Dr. Muazu Babangida Aliyu has said that the Nigeria Governors Forum (NGF) yearns for the removal of oil subsidy because it would provide more money to government for the development of infrastructure.

He also called on the federal government to initiate palliative measures to cushion the adverse effect of the impending policy on the poor Nigerians.

Aliyu who was speaking at a one day national roundtable for Good Governance in Abuja organised by the Faculty Board of the Initiatives, an interest group in the House of Representatives said, “With the removal of oil subsidy the state will get more money apart from the palliatives that will come from the removal of oil subsidy as states will get as much as N8billion.”

According to him, “This will in turn free government from the bondage of continuous financing of extensive projects which are best suited for private investment by encouraging efficiency and effectiveness in resource utilization, reducing government borrowing while raising revenue and promoting healthy competition.”

Speaking further, Muazu said, he was aware of the divergent views on the issue, adding that “considering the deplorable non-functional state of some government companies and industries, deregulating them will save government burden of continually financing these projects that are best suitable for private investment.”

The governor noted that “Government has over 400 agencies that are not fully functional because we do not need more than 100 agencies as some are even duplicated in their functions as this roundtable is expected to provide the necessary platform that will help the Nigerian economy fully prepare for and embrace the new direction.

“With the current trend in global economy, Nigeria must learn to catch up with the rest of the world or risk being left behind, for instance, with well over 3,557 kilometers of rail track network across the country, the Nigerian rail is in a parlous condition and requires prompt injection of huge capital far beyond what the public funding can offer.”

Responding to a question on whether the Nigeria National Petroleum Corporation (NNPC) was still desirable, the governor said the continued existence of the corporation was no longer necessary based on its present poor performances. According to him, “If you look at all the reforms carried out on NNPC, they all failed creating room for deregulation of the sector.”

Prof. Ganiyu Garba of the Economics Department of the Ahmadu Bello University in his contribution said, “Deregulation exists side by side with regulation as deregulation is a means to an end because there was a regime of regulations before deregulation so what to expect is relaxation of the laws.

“What deregulation does is that it relaxes the law for the industry to flourish because what is happening here is that to import fuel is more attractive than to locally source and sell here in Nigeria.

A former member of the House of Representatives and now an anti-corruption crusader, Hon. Dino Melaye in his contribution warned the federal government against removing fuel subsidy saying it will bring untold hardship to the poor masses. He said if the government insists on going ahead with the policy, the Nigerian people would give her the ‘Egyptian treatment’.

Earlier, the dean of the Initiatives, Hon. Eseme Eyiboh said members of the group have resolved to join hands with all stakeholders in the search for a workable and functional roadmap towards the nation’s transformation.

He posed the following questions to participants: “Is deregulation feasible in a society with a high level of corruption and ineptitude? Is the continued government intervention in basic products sustainable and economically viable? Is government regulation of products and services, productive or counterproductive? Is the basic issue of deregulation unduly politicized and to that extent suppressing its basic function and value?”