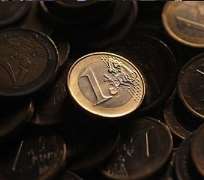 A European summit deal to strengthen budget discipline in the euro zone failed to restore financial market confidence on Monday, forcing the European Central Bank to step in again gingerly.

The euro fell, stocks slid and borrowing costs for Italy and Spain rose as investors weighed the outcome of last week's summit that split the European Union, with Britain blocking treaty change and forcing euro zone countries to negotiate a fiscal accord outside the Union.

Friday's initial market rally petered out in less than 24 trading hours due to legal uncertainty surrounding the new pact and the absence of an unlimited financial backstop for the single currency.

French President Nicolas Sarkozy said the legal basis of a new accord to enforce debt and deficit rules in the 17-nation euro area with quasi-automatic sanctions and intrusive powers to reject national budgets would be worked out before Christmas.

"In the next fortnight, we will put together the legal content of our agreement. The aim is to have a treaty by March," Sarkozy told newspaper Le Monde in an interview.

"You have to understand this is the birth of a different Europe -- the Europe of the euro zone, in which the watchwords will be the convergence of economies, budget rules and fiscal policy. A Europe where we are going to work together on reforms enabling all our countries to be more competitive without renouncing our social model," he said.

Traders said the ECB intervened to buy short-term Italian debt after yields on Italian and Spanish debt spiked. But ECB sources told Reuters last week that purchases would remain limited with a maximum ceiling of 20 billion euros a week.

There is no prospect of a "big bazooka" to shock the markets.

"Time is running out and action is needed on both sides of the equation, on the fiscal and monetary side," he told a business conference in Tel Aviv.

S&P has put 14 euro zone governments on watch for a possible rating downgrade in the coming weeks, arguing that the deepening debt crisis and looming recession will increase their potential liabilities and reduce their ability to cope with them.

"There is probably yet another shock required before everyone in Europe reads from the same page, for instance a major German bank experiencing difficulties in the market," Six said. "Then there would be a recognition that everyone is on the same boat and even German institutions can be affected by this contagion."

Interbank lending rates in the euro zone fell to their lowest level since May after the ECB threw cash-starved banks a lifeline last week by offering unlimited three-year liquidity to counter a credit crunch.

POLITICAL FALLOUT
Political aftershocks from Friday's historic rift between Britain and the rest of the 27-nation bloc continued to shake Europe on Monday with Prime Minister David Cameron facing tension in his coalition and doubts in the business community.

Cameron was assured of a hero's welcome from Euroskeptics in his Conservative party in parliament but faced a backlash from his Liberal Democrat coalition allies when he explains a veto that has cast Britain adrift from its continental partners.

LibDem Deputy Prime Minister Nick Clegg said on Sunday he was "bitterly disappointed" with an outcome that would diminish Britain's global influence and was bad for jobs and business.

In business, the chief executive of the world's largest advertising group, Martin Sorrell of London-based WPP, told Reuters that Britain's interests would be better serviced "inside the EU tent" than on the sidelines.

In Brussels, officials were groping for a strong legal basis for the planned fiscal compact, with Britain arguing that the euro zone cannot use the EU treaty institutions -- the European Commission and the European Court of Justice.

European Economic and Monetary Affairs Commissioner Olli Rehn told Reuters most of the practical measures to strengthen budget enforcement could be implemented immediately under a set of rules known as the "six-pack" agreed in October.

Euro zone finance ministers may hold an extra meeting before the end of the year to try to nail down details of the agreement before their winter break, diplomats said.

The euro area faces the next potential crunch point in mid-January when Italy, which has a debt mountain of 1.9 billion euros or 120 percent of its annual output, has to start issuing tends of billions of euros in bonds towards a 2012 total of 340 billion euros needed to roll over maturing debt.

"The question is will this help to stabilize sentiment? I don't believe so, given that those comments from (ECB President Mario) Draghi ruling out a bazooka during the ECB conference are still weighing on spreads," he said.