UCHE ELENDU AND HER WEDDING INVITATION 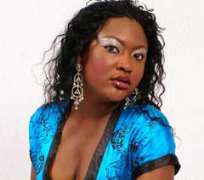 It is a thing of wide knowledge that pretty Nollywood actress Uche Elendu who married United Arab Emirate base Anambra State born businessman traditionally in 2008,is set to walk down the aisle on January 7,2012 at Owerri,Imo State.

The couple who have already produced a baby girl in this marriage is rocking Nollywood with their customized wedding invitation cards.

Recall that during their traditional marriage,Uche Elendu and Nku 1 as her hubby is fondly called printed a card that replicated an international passport.

While people considered it to be one of its kind,Uche has thrilled her friends once again by giving her white wedding invitation card the design of ATM card.