What the hell does Alec Godwin want? 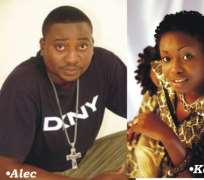 That may be the question many fans of Kefee may be asking about the singer's estranged husband, Alec Godwin as he recently released the music video of his single, You and I, designed to be a musical attack on his Ex.

The video which came in an animated form explained albeit inadequately, the many reasons and causes of the break up in their marriage which hit the rocks late last year. Many observers are of the opinion that while Alec is busy trading blames on Kefee, the Kokoroko crooner is gathering awards and soaring higher in her musical career.“I saw the video and really felt very sorry for Alec,” a fan of Kefee told nfc, “It was a very funny and confused expression of somebody that is missing something precious that he let go of easily, I hope he gets nominated for the Best Confused Music Video Award because right now, he deserves it.”Alec Godwin and estranged wife, Kefee were an item to behold when the going was good but an alleged little miscalculation on the part of Alec, who threw some lyrical punches on one of the artistes formerly under his label led to the artiste opening up a dirty can of worms that many took with a pinch of salt against Alec's wife Kefee.

After the incident, the centre no longer held for the duo that before long, after series of media attacks on each other, they called it quits. But Alec seems to be the wounded Lion as he is still reveling in the hurt or otherwise of the break up till now. nfc will keep you posted when the full album comes out.