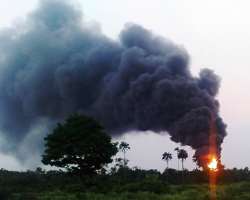 
The explosion caused a huge billow of smoke in the sky as residents docked for safety.


Eyewitnesses told THEWILL that the explosion was caused by fire from indiscriminate burning of refuse and waste near the pipeline conveying crude to the Warri Refining and Petrochemical Company (WRPC) located about a mile away from the explosion.


There was however no lives lost as a result of the fire and subsequent blast as fire and emergency personnel from Chevron and Shell Petroleum Development Company, Nigeria Gas Company (NGC), Delta State fire service and the Federal Road Safety Corps laboured successfully to contain the inferno. It took about 5 hours of intense work to put the fire out completely.


As a result of the fire, the Effurun-NPA Highway was blocked while vehicles were diverted to use the nearby Refinery Road.