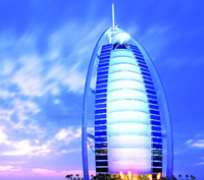 Corrupt Nigerian leaders have found a safe haven in Dubai, one of the seven emirates in the oil-rich United Arab Emirates (UAE), for stashing away their loot. The spendthrifts among them have also devised ways to satisfy their celebratory appetite at the drop of a hat. Sunday Sun investigation during a recent visit revealed that with tightening of the noose on slush funds in the Western world, some smart Nigerian leaders turned their focus to the delectable tourism city and business hub.

It was gathered that a former military administrator, who became an ambassador, owns a 35-storey tower named after him in the city. The structure is worth several millions of dollars.

A former Nigerian vice president also has a state-of-the-art building in the upscale Jumeirah district, close to the Atlantis Hotel, which is one of the most expensive and luxurious hotels in the world.

Among others said to own exotic structures in the Arab city are a former Lagos State governor, who is gradually emerging as a political Sheikh in Nigeria as well as a former radical Federal Capital Territory (FCT) Minister from the North. Both property are in the Deira axis of the emirate. Harried former Delta State governor, James Ibori – currently facing corrupt enrichment charges before a Crown Court in London – was equally said to have eye-popping investments there.

Our source revealed that during the late President Umaru Yar'Adua ill-health saga, the cabal, made up of his loyalists and some northern governors, usually congregated at Ibori's home to plot their strategy before going to Saudi Arabia, where the late Nigerian leader was hospitalised.

'When Yar'Adua was in hospital in Saudi Arabia, most of those loyal to him used to meet with Ibori here. They call him (Ibori) chairman and he usually hosted them in one of his houses. It is from here they left for Saudi Arabia,' the source disclosed, adding that, 'there is hardly a governor in Nigeria that does not own property in Dubai, especially the northern states governors.

'Nigerians are well respected here and they have the highest number of visa applications on a daily basis. The Dubai authorities grant not less than 95 per cent of these applications.'

Worried by the dwindling revenue from oil, Dubai relaxed its economic and trade policies to woo investors. Today, the largest chunk of the emirate's income is earned from hotel and tourism, real estate and financial services, similar to that of Western countries. All this is buoyed by the tight security in place and almost non-existent violent crime. There is hardly any fear about moving around at any time of the day. A young Nigerian, Chimaroke Nwaozuzu, who is a legal resident, told Sunday Sun that Nigerians prefer to invest and do business in Dubai because of the beauty of the city and the adequate security in place.

'Besides, it is safe for the corrupt leaders to hide their stolen wealth because they would not be exposed unlike in America or Europe. Here, Nigerian leaders buy estates and pay cash even though most of the property consultants and firms operate flexible payment terms. The firms agree to spread the payment period over five to eight years. But these leaders prefer to develop the Dubai economy and, unfortunately, it is with the money they have stolen,' he lamented.

According to an international crime threat assessment prepared for the United States government by the Federation of American Scientists in 2002, 'money-laundering activity in the UAE total $1 billion annually' after Dubai's property sector was opened up to foreign buyers. But the authorities do not agree as they play down the extent of money laundering, saying there were laws to fight it.

Described as 'seven-star', it is the most luxurious hotel in the world where the rate of a suite ranges between $1,000 (N160,000) and $28,000 (N4.5 million) per night. The iconic 60-floor structure, designed like the sail of a boat (actually built to resemble the sail of a Dhow, a type of Arabian vessel), stands 321 metres (1,053 feet) on an artificial island about 280 metres (919 feet) from the Jumeirah beach, and is connected to the mainland by a private curving bridge.

It was the tallest building used exclusively as a hotel until it was toppled by another in the city, Rose Rayhaan, in December 2009. At every time of the day, tourists from all over the world mill around to catch a glimpse and take photographs from the point allowed by the hotel security. 'Whenever they (governors) visit, they always go for the best, including the most expensive suites at the hotel. You can imagine how they spend our money,' the source further disclosed. Sunday Sun's observation inside the hotel was that its interior is a statement in creativity. Decked all over with gold and other Oriental ornaments, guests are given a royal treat typical of the Arab Sheikhs.

Helicopter cruise
The latest fad for some of the leaders is to celebrate the wedding and birthday of their children in Dubai. Guests are flown from Nigeria. According to our source, the celebrants and guests go on helicopter cruise instead of the usual boat cruise, after which a lavish reception is held at the Amani Club atop the Burj Khalifa. 'The Burj Khalifa is a 150-storey tower and it is the tallest building in the world. Entry fee into the Amani Club is $1,500 (N240,000) per person,' the source added.

The fascination for those who embrace this service is that it offers an opportunity to watch the picturesque Dubai skyline from the air in your 'own helicopter', according to the tour firm.

Sunday Sun could not however get the exact fee per tour but it was gathered that it does not come cheap and not every Emirati can afford it. Besides, the fee is determined by the routes and number of minutes the helicopter is airborne, which is between 15 and 60 minutes.