WHY OWERRI IS NOW RATED AS NIGERIA'S DIRTIEST CITY 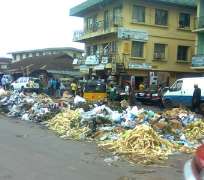 Owerri the capital of Imo State in Nigeria has been named the dirtiest city in Nigeria in a report published on Tuesday by Association of Waste Managers of Nigeria. Excrement in the street, graffiti, indiscriminate dumping of refuse and lack of sanitation exercises are the typical problems which Owerri city suffers, the report said. Another is the pure water sachets, cans, the mass booze-up, which brings hundreds of teenagers on to the streets at weekends, leaving litter strewn on streets. The report also stated that 88 percent of those questioned believed more public awareness of litter problems and regular cleanup exercise would have greater effect in Owerri .According to the report ,146 local authorities were contacted and it was discovered that each of the thousands of Imolites living in Owerri generates 1.5kg of rubbish per day and that only 5 percent of homes in Owerri have rubbish collection systems.

I am down and angry about this news. It is shocking to discover that for six months now the administration of Owelle Rochas Okorocha has not conducted the monthly cleanup exercise. Owerri is now rated the dirtiest city in Nigeria. It is still fresh in our memory that by the first 100 days of the last administration of the state, Clean and Green policy and the New face of Imo program transformed Owerri into an admirably clean city. During the last administration, once in a month Imolites take part in a major cleanup exercise, picking up garbage, sweeping streets, sweeping roads, clearing away refuse, sorting bottles and so on.Thanks to an administration with a poor outlook on life, ignorance, laziness and nothing to gain by being clean, Owerri has become the dirtiest city. Governor Okorocha has cut Imo citizens out of their clean-up the environment responsibility and nobody seems to have the guts to say anything for fear of the governor’s attack dogs and for fear of being accused of fanning ambers of disunity in the state.

All it takes for evil to thrive in a society is for few good men to say nothing. All what we are saying is that our governor should face the task of governance and meet the people’s expectations. We demand that Okorocha should reintroduce the monthly sanitation exercise in the state. We demand that the Imo State government should find a way of stopping indiscriminate dumping of refuse in Owerri and if possible inaugurate a sanitation court to prosecute offenders. Owerri city is now refuse city as a result of poor waste management. Even people living outside Owerri now transport refuse into it and dump them along the roads.

We will also never stop demanding that Governor Okorocha should recall the sacked 10,000 legally employed Civil Servants in Imo state.The civil Servants were duly employed according to Imo State Civil Service Commission laws. There are laid down civil service rules to follow in the sack of any civil servant. We must follow the rule of law in governance for we operate democratic system in Nigeria. The expectation of the working class in Imo State,traders, keke riders and transporters was that Okorocha would usher in a government where citizens right will be protected under the provision of the constitution as against decree under military dictatorship. Six months into Owelle’s rule, we have begun to ask question: is there a rule of law? Illegal proclamations are being made in gross violation of democratic norms and the provisions of Nigerian Constitution.

The executive fiat announcement of the sack of 10,000 civil servants in Imo state by the governor is an abuse of executive powers. It portrays the government as being very insensitive to the plights of the masses and a non respecter of the rule of law. Section 17 sub 3(b) of the 1999 Constitution of the Federal Republic of Nigeria states, “the state shall direct its policy towards ensuring that all citizens, without discriminations on any group whatsoever, have the opportunity for securing adequate means of livelihood as well as adequate opportunity to secure suitable employments”. A governor that cannot provide employment for the youths of the state has no business in office.