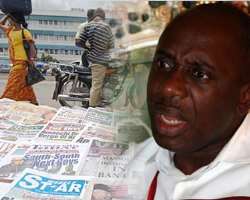 Mudslinging and propaganda seem to be permanent features of Nigerian politics. As the political season draws near, those who are in the business of such peddling grab headlines and feed fat. Their strategy is to create the fire and also position themselves before the vulnerable, for consultations on how to extinguish it. That is how it works.


The fact remains that Nigerian politics have failed to deliver development for so long that anyone who dares to break the rule gets all the attention. He threatens his peers and can easily be made a scape goat because of it. It is a crime to raise the bar because that will naturally threaten the status quo. Desperate moves will be made to tarnish the person’s image and ridicule his achievements. Rotimi Chibuike Amaechi, the Executive Governor of Rivers State is unarguably such a leader and it is no surprise at all that any opportunity to splash mud at him is never spared by his detractors. One of such moves is the recent article written by one Ifeanyi Izeze, an Abuja based media consultant and published on Sahara Reporters on the 6th of December 2011. Let me make something clear, every leader that is spending public money ought to be asked questions. Both the author of this article and Mr. Amaechi are strong advocates of transparency and good governance. Anyone who knows him/them will attest to this fact.


However, reading the said article by Mr. Izeze immediately exposes that this is yet another subset of a pull-him-down agenda of a disgruntled ‘consultant’ seeking attention. The word consultant appears to be the one of most frequently abused words among the Nigerian pseudo elite, lately. Someone told me that it is a mask for unemployment and that may be true. In fact, one of the most convenient things to do after looking for job endlessly in Abuja is to turn to a consultant. Media consultancies (most of them fake) proliferate in their scores in Abuja, just as estate agents. Ifeanyi Izeze and his likes belong to this lot. They are often seen littered or loitering around aimlessly at the lobby of many five star hotels in Abuja looking for politicians to hoodwink, cajole or blackmail in the name of consultancy. I made a few inquiries about Mr Izeze and I am certain that he must have attempted to play a fast one on Amaechi without success. Amaechi will not fall for those machinations. He is not a conventional Nigerian politician. He (Ifeanyi) must know that he is not alone. Many people have tried that with him (Amaechi) severally and they had the same experience. Contrary to the claims of the article, Rotimi Amaechi is not given to profligacy. Indeed he has a reputation of being very tight fisted especially to those who have nothing positive or productive to offer.


On the issues of armed robbery and security vote raised by Mr. Izeze, it is important to state here that the security vote is supposed to be used by Governors to maintain security in their states. The cases of Rivers State in the past few weeks have become have been quite surprising and so I will not be stunned if a committed Governor decides to spend a bit more to equip those in charge to do their work and quickly reverse this trend. But as he (Ifeanyi) pointed out in his article, it sounds like something beyond what eyes can see - really.

Agreed, Amaechi is the Chief security officer of the State but Rivers State does not own the Police, the Federal Government does. His role as Governor, in my view is to work with security agencies to put together a strategy and give them adequate logistics to do their work. The robbery incidences are very recent and cannot diminish the huge improvements that have been recorded by Amaechi’s government. If Mr Izeze wants to be like a ‘watchdog’ journalist, he should direct the same questions on security vote to all the Governors of all the 36 states.


Furthermore, the fact that Amaechi has hosted several big events in Rivers State like the National Sports Festival, Rivers State Investment Summit etc without a single incident is indicative of the security progresses made already. Could anyone have dreamed of such feats before 2007? Mr. Izeze’s timid reference to anarchy is therefore both laughable and unintelligent. Apart from his clear allusion to a possibility of sabotage, the ‘consultant’ completely forgot that Rivers State is surrounded by other states like Abia and Imo States. Without making definite assertions, there could be a possibility that these hoodlums might be coming from across the borders of Rivers States. Often, perpetrators of kidnapping in Rivers State have been traced to nearby states. Although this does not absolve Mr. Amaechi of blames completely but it leads a fair minded analyst to call for increased political will from neighbouring states in the fight against criminality in the old south east zone. On several occasions, suspicious individuals have been held at border check points but most importantly Mr. Izeze should have raised the matter of the state police which the Governors have been asking for. Lagos, Luanda and indeed other fast growing cities all over Africa face similar security challenges. Having said this, can I ask Mr Izeze to tell us how temporary and surmountable security challenges can reverse things like quantum infrastructural leap of the Amaechi administration? Will those roads, power plants, world class secondary schools and health centres built by Governor Amaechi disappear as a result of one robbery incident? Does Mr. Izeze not know that Rivers State is the only state that is currently self-sufficient in power generation in the country?


A few weeks ago, a British journalist visited Mr Amaechi and asked him for a drive around the town. What was supposed to be an interview session was almost turned to a carnival. Rivers people are happy with Amaechi and anyone who has lived in Port Harcourt in the last ten years will have the same confession. The results of the 2011 elections are there for everyone to see. No doubt the interventions are far from perfect, the projects are too many and need to be completed as soon as possible, but that is the philosophy behind a developmental state. That was exactly the path the Asian tigers took at the immediate aftermath of the World War II. I have visited Rivers State several times in the last two years and I cannot allow the falsehood contained in the article of Mr. Izeze to go unchallenged. The role of the media in the expansion of the Nigerian democratic space must be acknowledged. However, the media has also created rooms for rag tag opportunists like Ifeanyi Izeze who go around trying to hoodwink gullible politicians. He missed the point completely in his attempt to mislead the public through his article. The Rotimi Amaechi I know will not succumb to machinations and cheap blackmail by a brief case media consultant. His verifiable achievements in Rivers State remain self-evident.


** Uche Igwe lives in Washington DC. He can be reached on [email protected]