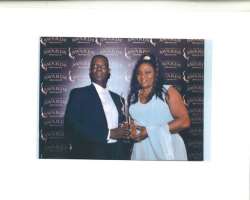 The 14th Anniversary of the Africa Films Award-Afro Hollywood took place on the 11th of November 2009 at Stratford Town Hall, East London in the UK.

Recipients such as Justus Esiri, Funke Akindele –Jennifer, Omo-Baba-comedian, Mercy Johnson, Monalisa Chinda to mention a few were there to receive their awards. Amongst the recipients was Ms Titi Jacobs-Popular known as LadyTJ, a household name in the UK's film industry, awarded for her contribution and excellence as an artiste. LadyTJ is a UK independent Producer, Director and Script writer, Editor, Media guru and an actress who has contributed immensely to the art industry in Diaspora. Her children, friends and family were there to support her too.

Nollywoodgists.com asked her how she felt.

In her own words.. “It's a honour to have received the award and I would like to commend Mr and Mrs Mike and Golda Abiola for at least recognising the fact that there are artistes in the Diaspora who are trying to make enormous contributions to the Art industry both here and in Nigeria or should I say to the Black Industry as a whole. This, in my opinion is a start in the right direction and this would really encourage the artistes here to strive to want to do more”. Like I said when I got the award, it's not just for me, but for all struggling artiste abroad.