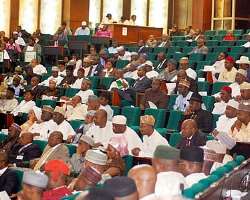 …Confirms Six Nominees, Rejects Two
ABUJA, December 8, (THEWILL) - The Senate on Thursday resolved to urge President Goodluck Jonathan that in making any or further nomination(s) to the Board of the National Human Rights Commission, he should respect the provisions of Section 14 (3) of the Constitution of the Federal Republic of Nigeria 1999 (as amended).

Nonetheless, they confirmed the nominations of Dr. Chidi Anslem Odinkalu as Chairman and Prof. Ben Angwe as the Executive Secretary of the commission.

According to the Committee, Osim, who hails from Abia State, was rejected for lack of exposure and experience in human rights issues.

The Senate Committee on Judiciary, Human Rights and Legal Matters while presenting the report said; “After a careful scrutiny of the CV and other accompanying documents of nominees and having regard to their exposure, experience in human rights issues, performance, qualifications and competence, approved the nominees.”

The committee said it anchored its decision based the questions put to the nominees.

On the disqualification of the Osim, the committee said it was; “In response to questions put to the nominees by the Committee and going by the provision of the National Human Rights Act and the Paris Principles, which sets international standards for the composition of membership of National Human rights Institutions, it was established that the nominee failed to display sufficient knowledge of the nature of responsibilities and functions of the Commission.

“Therefore, taking into cognisance the fact that he lacks exposure and experience in human rights issues, the committee cannot support his nomination to the Board of the Commission.”

On Cynthia Ene Olofu Ogbe, the Senate noted that the nominee failed to demonstrate knowledge and sufficient experience in human rights issues and therefore, was not capable to represent women on the Board of the National Human Rights Commission.

Meanwhile, three other nominees including NTA Broadcaster, Mrs. Eugenia Abu, Sully Abu as well as Olawale Fapohunda did not turn up for screening.

Arguments however broke out, when North Eastern Senators alleged consistent marginalisation of the geo-political zone in federal appointments. Observing that current nominations undermined the principle of federal character, they urged the Senate to suspend the confirmation pending when the President ‘corrects the error’ by sending the names of nominees from the North East zone.

Those, who spoke on behalf of the zone include the Deputy Senate Leader, Senators Abdul Ningi, Buka Ibrahim, Aisha Alhassan, Emmanuel Bwacha and Joshua Lidani.

The President of the Senate, Senator David Mark, who attempted to douse the tension, gave an explanation that aside the nomination of Chairman and the Secretary, other nominations were made by various organisations of which the President might not have influenced.

“The President nominated two people, the chairman and secretary. The media is not nominated by Mr. President. The Media was nominated by someone else and the President had no reason not to respect the nominees. The NBA and other bodies represented in the Board also submitted their representatives. So, this is my own explanation on this particular case and since the committee has made their recommendation, we have to listen to the committee and you cannot hold the President responsible for the names submitted.

“When we have a situation like this, we must look at it very objectively and put away sentiments. When professional bodies are asked to nominate, we should be careful how much we think we can influence their nomination because we are not members.

"This committee has been very consistent even in the 6th Senate. All I am saying is that I have given enough time for the debate to justify everything and having found an opportunity to remedy it, throwing away bath water and the baby is not the remedy. The committee rejected two and they will stand rejected unless there is any other very serious objection.”

In his contribution, Senator Buka Ibrahim, alleged that it was not the first time the North East was marginalised.

"I accept your explanation but this has been going on for some time. We are gradually being marginalised. It has been happening over and over, this is not the first time. Now, there are problems with the report. The chairman and secretary can come from anywhere and the President can still correct this. We should keep aside the recommendation and return the nominations to him for correction,” he said.

Senator Aisha Hassan, representing Taraba North emphasized the power of the President to either influence or give guidelines on nominations.

“Yes, it is not Mr. President that does the recommendations but he can influence the inclusion of certain names or give a guide that people should be nominated from certain zones”, she stated.

Senator Shola Adeyebe however provided the antidote, when he stressed the need to replace the rejected nominees with the North East slot.

“I align myself with the feelings of marginalisation from our colleagues from North East. We must be fair to those that presented the report. They recognised that North East were not included and recommended that corrections would be effected. Let the rejected nominees be replaced with people from the North East. This is not the critical issue at this time and as such, we should not hold it. Yet, a strong message has been passed and no one would present any form without thoroughly investigating it,” he stated.

The Deputy Senate President, Ike Ekweremadu said: “Everyday, we pride ourselves as senators of the Federal Republic of Nigeria and not senators of any particular section. This is a day to demonstrate it.

“We should take the candid advice of Senator Adeyeye – that there are three vacancies and that the President should ask that replacements be made from the North East so that we can make progress in the interest of the country and fairness of the North East.”