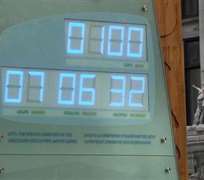 The White House unveiled a countdown clock this week, tick-tocking away the days, hours, minutes and seconds to a December 31 deadline for extending and expanding the payroll tax cut. It's a doomsday-style reminder that taxes will jump for an estimated 160 million Americans on January 1 if Congress doesn't act.

President Obama is proposing a one-year extension and expansion of the tax holiday already in place on the employee share of the payroll tax, cutting it to 3.1 percent from the 2011 rate of 4.2 percent. He also proposes cutting the employer share of the tax to 3.1 percent from 6.2 percent on the first $5 million of payroll next year; there would be a complete employer payroll tax holiday for companies that grow their payrolls up to $50 million in a year by hiring new workers or raising the salaries of existing workers.

The payroll tax cut has the advantage of immediacy. It puts money in workers' pockets - $2,170 next year for a married couple filing jointly with $70,000 in gross income, according to White House estimates. That's a meaningful tax break, especially in hard times. And, most of the cut would go to middle and low-income workers. That means most of the money likely will be spent, which is good for the economy.

However, what's good for the economy now could well be be bad for Social Security later.

The payroll tax actually is the line on your pay stub labeled FICA - the Federal Insurance Contributions Act. Although technically - and legally - a tax, the architects of Social Security always intended FICA as a premium payment that workers would contribute to their retirement. Franklin D. Roosevelt is famously quoted in the papers of one of his aides as saying the dedicated FICA revenue source was critical, because it meant "no damn politician can ever scrap my social security program."

Thus far, Social Security has been held harmless from the FICA holiday; the losses have been made up from general federal revenue. But extending the cuts further does muddy the water on Social Security's self-funding feature.

Leave aside the question of how the next round of the FICA holiday might be funded - President Obama wants a tax on millionaires; Republicans want spending cuts. Either way, shifting general revenue makes Social Security look like any other federal program - keep it, cut it or nick it to death by a thousand cuts (see: Social Security Administration budget cuts that are forcing cutback in field offices and elimination of annual personal statements.

And, in a political climate where a decision to allow a temporary tax cut to expire is labeled a tax hike, it's hard to see when, if ever, the FICA tax would be restored to its previous level.

Paying for Social Security out of general revenue also creates confusion about the program's role in the federal deficit.

The Washington Post, for example, stated in a recent news article that Social Security is "sucking money out of the Treasury." The Post noted that replacing cash lost to this year's payroll tax holiday will cost the Treasury $105 billion, and that expanding and extending the cuts would mean "Social Security will need an extra $267 billion to pay promised benefits." That description sounds like a fiscal deficiency in Social Security, when the payroll tax holiday is no more than a convenient way to deliver a jolt of economic stimulus.

Social Security doesn't contribute directly to the deficit. The Social Security Trust Fund (SSTF) is running a $2.6 trillion surplus - and despite what you hear about red ink, the program actually is cash flow positive if you include interest payments on SSTF bonds and income taxes paid on benefits by high-income recipients.

Social Security does face a long-term imbalance around the year 2035, when the SSTF will be exhausted; at that point, the program would have sufficient resources to pay only 77 percent of promised benefits - that's the problem that needs fixing, but it has nothing to do with the federal government's deficit spending.

Most mainstream economists agree the payroll tax cuts provide meaningful stimulus. Moody's Analytics economist Mark Zandi has said that the economy might well have slipped into recession without the current payroll tax cut, and he estimates that allowing the payroll tax cuts to expire would reduce GDP growth by one percentage point in 2012, translating into one million fewer jobs by the end of next year.

Bottom line: The payroll tax cut extension is mediocre policy, but the alternative looks worse - a huge tax hike on the middle class just as the economy appears to be gathering momentum. Since the deadlocked Congress isn't capable of doing anything better, lawmakers should hold their noses and vote "yes" on the President's plan.