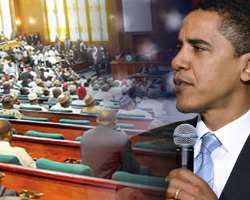 ABUJA, December 7, (THEWILL) - The Nigerian House of Representatives Wednesday defied the opposition of US President, Barrack Obama and the West to the passage of the anti- same sex marriage bill by the Nigerian Senate as it passed the Same Sex Marriage (prohibition bill) 2011, through first reading.

The Nigerian Senate had last week passed the bill to criminalize gay marriage, stipulating 14 year jail term for violators of the bill in the country. It subsequently transmitted the proposed legislation to the House for concurrence.

Obama had on Tuesday issued a Presidential Memorandum directing “all federal agencies engaged abroad to ensure that U.S. diplomacy and foreign assistance promote and protect the human rights of LGBT persons.”

Also Wednesday, in reaction to the Presidential Memo issued by Obama, the Nigerian Government through its Minister of Information, Mr. Labaran Maku said Nigeria is an independent nation and so the West has no business dictating to it with regards to making laws that aim to preserve its culture and values.

Addressing correspondents at the end of the weekly Federal Executive Council meeting in the Presidential Villa, Abuja, Labaran said some of the things that are considered as fundamental human rights abroad are offensive to the African culture, tradition and values.

The Minister added that the federal government has backed the National Assembly and the Nigerian people on the law.

"Let me make the point clear, our country is an independent country, we reserve the right to make our laws without apology to other countries because we live in a democracy and in every democracy as you know, there are institutions, there are laws and also there are cultures, there are beliefs and values.

"At any rate, between Europe, America and Africa there is a huge culture gap. Some of the things that are considered fundamental rights abroad can be very offensive to African culture, tradition and to the way we live our lives. We will take comments by our foreign partners and friends as legitimate, but I also know that it is the legitimate rights of Nigeria as an independent nation and our legislature to legislate and discuss any matter in the world that comes before them that is also in tune with the welfare of the people of Nigeria.

" The truth of the matter is that our democracy will be guarded by Nigeria's interest and values,” the Minister told State House correspondents.

The proposed law amongst other punitive measures provides that witnesses or anyone who helps same sex couples marry could be sentenced to 10 years imprisonment.

The bill also makes it illegal to register gay clubs or organizations, as well as criminalizing the "public show of same-sex amorous relationships directly or indirectly."

Violators of the laws would face 10-year imprisonment as well.