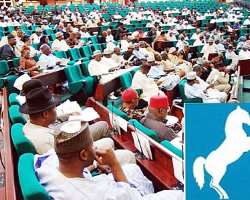 ABUJA, December 6, (THEWILL) - The House of Representatives Tuesday directed the Security and Exchange Commission (SEC) to immediately suspend and withhold its final approval of recapitalization drive of Union Bank Plc pending the outcome of its rescheduled investigative meeting.


Union Bank Plc, one of Nigeria’s 5 rescued lenders in the aftermath of the global financial meltdown is seeking to shore up its capital base.

The House Committee on Capital Market, which issued the directive, also announced that its meeting with the management of Union Bank of Nigeria has been re-scheduled due to the failure of the bank to provide answers to the queries raised by the committee concerning the recapitalization transactions.


“In view of the inability of the management of Union Bank of Nigeria Plc to provide key answers to various queries this committee has raised relating to Union Bank’s compliance with rules, procedure and statutes guiding Rights issues, placing and capital reorganization, we request that the Securities and Exchange Commission withhold further approvals of the said transaction pending the outcome of a rescheduled hearing where Union Bank will be expected to come with relevant documents and information regarding the matter in question.”

Hon. Hembeh later told journalists that “We called the meeting as part of the process that we have started to look into merger of banks. We asked them pertinent questions on the recapitalization process particularly as regards the rights issue that Union Bank undertook and we found out that they were not prepared to give us the necessary answers that we asked.


“We are asking these questions particularly about Union Bank because of petitions to this House by some Nigerians over the whole process. We were told that shareholders were not carried along in the process of the rights issue. We were told that approvals from the Securities and Exchange Commission were obtained without request from the shareholders of the bank.

“We are concerned about the sustainability of the process and we will ensure that the right thing is done,” the Representative stated.


When asked what the committee would do if it discovers irregularities, the chairman said “I will not jump into conclusions. We want to give all institutions benefit of the doubt. But we also have to get to the root of the issues raised in the petitions and we cannot sacrifice them because somebody is saying that he is in a hurry to complete the process. We must ensure that every iota of due process is followed. Where we find out that substantial non-compliance has taken place, we must ensure that these things are done correctly in the interest of the country,” he added.