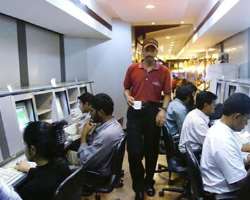 India has urged social network companies including Facebook, Twitter and Google to remove offensive material, unleashing a storm of criticism from Internet users complaining of censorship in the world's largest democracy.

Telecoms and Information Technology Minister Kapil Sibal met executives from Facebook, Google, Yahoo and Microsoft on Monday to ask them to screen content, but no agreement with the companies was reached, he said.

Sibal denied he was promoting censorship but said some of the images and statements on social media risked fanning tensions in India, which has a long history of deadly religious violence. He said the firms had rebuffed earlier calls to take action.

The country of 1.2 billion people created new rules earlier this year obliging Internet companies to remove a range of objectionable content when requested to do so, a move criticized at the time by rights groups and social media companies.

It was not clear if Sibal was proposing stiffer regulation, but Law Minister Salman Khurshid later said his colleague was calling for dialogue about offensive content, not censorship.

A New York Times report on Monday that said Sibal called executives about six weeks ago and showed them a Facebook page that maligned ruling Congress Party chief Sonia Gandhi and told them it was "unacceptable."

The government is very sensitive to criticism of Gandhi, whose family has dominated Indian politics since before independence from the British and has lost two prominent figures to assassination.

Officials are often keen to be seen as protectors of the family. Last year there were moves to block the English translation of a Spanish novel about Sonia Gandhi's life.

"We have to take care of the sensibilities of our people, we have to protect their sensibilities. Our cultural ethos is very important to us," Sibal said on Tuesday, after showing reporters some images he said were taken from the Internet and would likely offend religious communities.

Sibal said his ministry was working on guidelines for action against companies which did not respond to the government's requests, but did not specify what action could be taken.

"We'll certainly evolve guidelines to ensure that such blasphemous material is not part of content on any platform."

Despite the rules in place, India's Internet access is largely unrestricted, in contrast to tight controls in fellow Asian economic powerhouse China. But in line with many other governments around the world, India has become increasingly edgy about the power of social media.

India's bloggers and Twitter users scorned the minister's proposals, saying a prefiltering system would limit free expression and was impossible to implement. The phrase #IdiotKapilSibal was one of India's most tweeted on Tuesday.

"The idea of prescreening is impossible. How will they do it?...There is no technology currently that determines whether content is 'defamatory' or 'offensive'," India-based cyber security expert Vijay Mukhi told Reuters.

TAKEN ABACK
The New York Times report, which Sibal did not confirm or deny, was the focus of much of the online anger directed at the minister on Tuesday.

"I love Sonia Gandhi. She is awesome. She is God. And never wrong about anything, ever." (This msg is approved by Kapil Sibal's cyber cell)," posted twitter user Sorabh Pant.

Indian authorities were taken aback in the summer by an anti-corruption campaign that multiplied on Facebook and Twitter, drawing tens of thousands of people to street protests and forcing the government to agree to new anti-graft laws.

RIM gave India access to its consumer services, including its Messenger services, but said it could not allow monitoring of its enterprise email.

Facebook said in a statement it recognized the government's wish to minimize the amount of offensive content on the web. The California-based company said it removes content that violates company rules on nudity and inciting violence and hatred.

Internet search giant Google, which owns social networking site Orkut and video-sharing site YouTube, also said it already removes content when it is illegal or against its own policy.

"But when content is legal and doesn't violate our policies, we won't remove it just because it's controversial, as we believe that people's differing views, so long as they're legal, should be respected and protected," the company said in a statement.

India now has 100 million Internet users, less than a tenth of the country's population of 1.2 billion. It is the third-largest user base behind China and the United States. It is seen swelling to 300 million users in the next three years.

During last year's clampdown, officials also said Google and Skype would be sent notices to set up local servers to allow full monitoring of email and messenger communications.