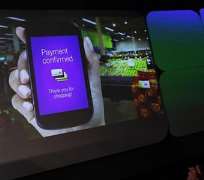 Galaxy Nexus is a smartphone developed by Google and Samsung Electronics Co based on the internet search giant's Android software.

A Google spokesman told the newspaper that "Verizon asked us not to include this functionality in the product," without elaborating on the reason behind the Verizon's move.

Verizon, the U.S. top carrier, has formed a joint venture with rival AT&T Inc and T-Mobile USA that lets people make payments and redeem offers via their smartphones called Isis and is expected to begin trials next year, the Journal said.

Verizon did not immediately respond to requests for comments from the newspaper.

None of the parties were immediately available for comments.