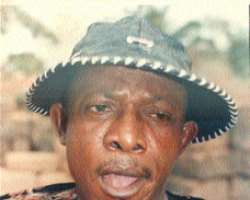 The family of kidnapped nollywood actor, Nkem Owoh a.k.a Osuofia has offered a ransom of one million naira to the kidnappers.
A daily newspaper, The Punch reported that a family member confirmed to its correspondent on condition of anonymity that the family offered the the amount but the kidnappers were insisting on N1.5m.

Nkem Owoh was kidnapped on Monday along Portharcourt-Enugu expressway and the kidnappers had requested for N15m before he could be released.